The episode of Daire le Roux is one of the most interesting sections of the 12th-century Roman de Thébes. Daire is a vassal of Eteocles, besieged in Thebes by his brother Polynices. The two brothers had agreed to alternate ruling over the city, but Eteocles did not respect the pact. Daire occupies a tower through which the siege might be easily broken. Alexander, Daire’s son, is captured by Polynices. He is briefly sent to Thebes, to urge his father to give the tower to Polynices in exchange for his freedom. Initially Daire refuses the idea and tries to convince Eteocles to return to the original pact agreed with his brother, granting shared governance, but Eteocles flies into a rage and assaults Daire. Daire immediately consigns the tower to Polynices’ men, but the operation is seen by the Thebans, the tower is destroyed, and Daire is captured. He is put on trial, where it is discussed whether Eteocles’ assault had affected the feudal bond between him and Daire. Daire’s life is saved by Queen Jocasta, who arranges Eteocles’ wedding with Daire’s daughter, Salamander. At the same time, Polynices frees Alexander.

This subplot within a longer narrative is one of the most striking examples of the actualisation of ancient history in the 12th-century romans d’antiquité, mainly because of the feudal theme and its development in the account of the trial. It is also an episode that brings to the fore the ethical outlook of the medieval audience. 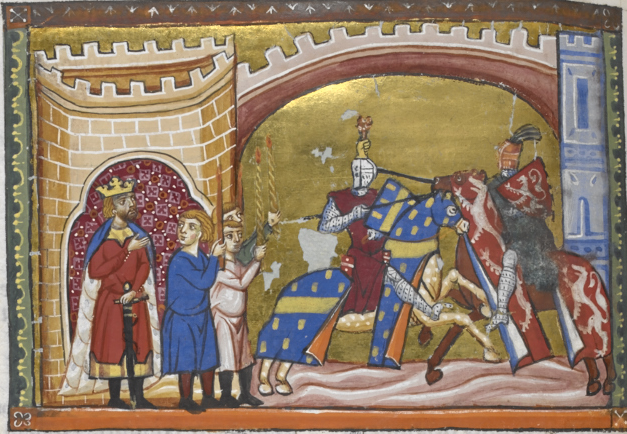 (Daire’s judgement, as told by the romance, is neither the true authority nor of certain authority.

[My] lords, know that I don’t want to undertake recounting the judgement of Daire le Roux, who surrendered his tower to Polynices, [an act] which would have caused the city to be lost, because the account would be too long, and would disagree with established authority. But in order to embellish speech, many things which are not true are told and related in accounts of the past. For this reason I will discard it and the account of many things which may happen to be liked by most people.)

So, Daire’s history was told in order to please the public, but is not true, and for this reason left out of the Histoire ancienne. 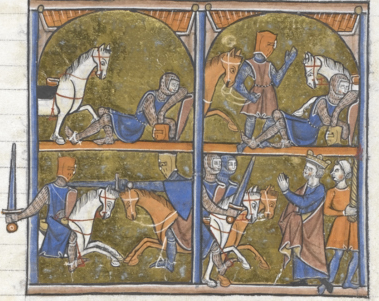 This paragraph shows a high degree of variation in the manuscript tradition. In BL Add. 15268, copied in Acre, the rubric is missing and the passage is copied as the final section of the previous one. Also the reference to ‘auctorité seue’ is absent. In BL Add. 19669, an early manuscript produced in Northern France, we read just a single sentence closing the previous paragraph, in which all references to authority and truth are missing and the absence of Daire is presented as a sheer matter of abbreviation:

(And know that I don’t want to undertake recounting the judgement of Daire le Roux who would have caused the city to be lost because the account would be too long and I will discard the account of many things.)

We find the same reading in BnF, fr. 17177 and in Vienna, Österreichische Nationalbibliothek, 2576. In London, BL, Royal 20 D I, the passage is completely missing.

The invocation of brevity for justifying the absence of an episode is a commonplace of medieval vernacular texts, as well as the accusation of vanity directed towards those who adopt a less concise style. A lot less common is the reference to the true and certain authority as well as the rare and potentially technical expression ‘traitié d’estoire’. We do not have conclusive evidence of BnF, fr. 20125 being the most faithful witness of the original version of the Histoire ancienne. Nonetheless, we know that this version is much more open than the other witnesses to the evocation of technical language that is rarely found in other vernacular sources.