In anticipation of the forthcoming publication of our interpretive edition of Rome II in Paris, BnF, f. fr. 20125, we will be exploring in this blog some episodes which might just whet your appetite. But first, a disclaimer: we don’t advise copying some of the drinking practices that the Histoire ancienne describes! 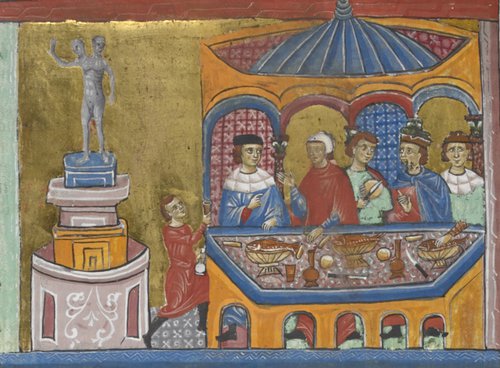 Sometimes the author of the Histoire ancienne suggests parallels between the event narrated and contemporary reality. One interesting example of this procedure occurs in the account of the siege of Numantia by Scipio Africanus in 133 BCE. Numantia was a Celtiberian city in the north of Spain. The long and exhausting siege has gained a place in Roman history because the people of the city, having realised that there was no hope of defeating the Romans, sent the last available troops in a desperate counter-charge; those remaining inside the walls of the city set Numantia on fire. Before this final attack, the Numantian soldiers abundantly drank a local beverage:

They had just drunk their fill not of wine—this place was not favourable to viticulture—but of the juice of a weed. This drink is skilfully concocted, and it is called caelia because it is heated. The potency of the moistened fruit bud is first intensified by heat.
(Paulus Orosius, Historiae adversos paganos, V, 7, 13–14)

The caelia was a Spanish typical wheat liquor, mentioned by Pliny the Elder in his Naturalis Historia. The Numantian episode, firstly narrated by Livy in one of the lost books of the Ab urbe condita and then transmitted by Florus and Orosius, is a typical example of how classical writers associated the consumption of alcohol with barbarian customs.

The version of this passage in the Histoire ancienne is revealing of its author’s approach and culture.

But they warmed themselves up with the drink, which was strong, and they recovered their spirits like the English still do: they drink so much drink, similar to that which they call 'goudale', that they get drunk as they would do with the best wines from Cyprus that people bring to Calabria. 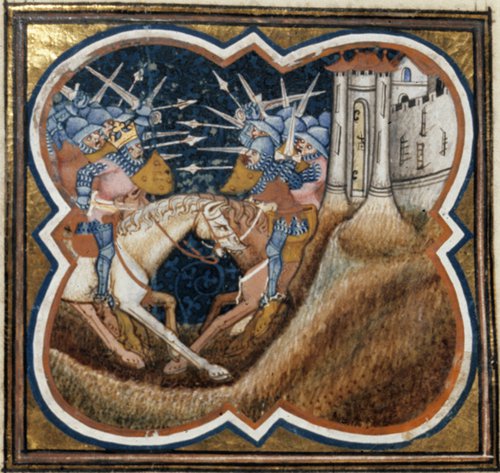 The author of the Historie ancienne was probably unaware of what caelia was: he does not say which type of alcoholic beverage the Numatians were drinking. He decides to substitute the ethnographic remark found in Orosius with another one, concerning the behaviour of some of his contemporaries, the English. ‘Goudale’ is the common Old French word for ‘beer’; it derives from the Old English ‘gôd ealu’ (‘good ale’), and this is one of its earliest attestations. The author of the Histoire ancienne seems to be proposing here a north-south binary between beer-drinking English and wine-drinking Mediterraneans (which, some might say, still exists today!). In this passage, the judgement on drinking is not moral: it concerns quality, or perhaps taste.

In the face of death, other protagonists prefer to drink poison rather than fall into the hands of their opponents. This however doesn’t go so well for King Mithridates, one of the Romans’ most formidable adversaries. Mithridates challenges the Roman might in a series of encounters over 30 years (or 40 according to some accounts, §1228.2). He eventually turns to the bottle, when Pharnaces, one of the sons whom he hasn’t killed, leads Mithridates’ own army against him. Seeing no escape, he gives his wives, daughters and mistresses ‘venim’ (§1227.3) and then drinks a large part of it himself:

but this was no use for what he coveted: death. Because before this he had drunk so many antidotes to venom and poison in order to deceive death that this toxic potion was no use for him.

Indeed, Mithridates is famous for his discovery of such antidotes, as Pliny the Elder recounts in his Naturalis Historia (XXV, 5–7). In the end, as the walls of the city fall down around him, he begs a knight to do the deed, and is swiftly decapitated. As soon as Pharnaces hears about his father’s death, he hands himself and his father’s kingdom over to Pompey.

In the final section of the Histoire ancienne, the ‘Conquest of France by Caesar’, we come across another type of deadly drinking. The Roman general Marcus Licinius Crassus, who with Julius Caesar and Pompey forms the First Triumvirate, is defeated by the Parthians at the Battle of Carrhae in 53 BCE. Crassus, infamous for his greed, is captured by the Parthian general, Surena, who decides—the Histoire ancienne tells us—to teach him a lesson:

And they had the consul Crassus brought in before them, and they had him laid out with his back down on the table. And then Surena said to him in the Arabic language, ‘Oh! You, consul of Rome! You always had a thirst for gold, of which you could never be quenched. Now drink gold, and you will be quenched this time like you have never been before in your whole life!’ As soon as he had said this, he had Crassus' mouth opened with a knife placed in between his teeth, and he had the boiling gold, which was molten, flow onto his body and into his mouth, which quickly burned his heart, his insides, his eyes and his nose, and all his face—to his great pain and grievous suffering.

This passage is not found in Orosius' Historiae adversus paganos, and versions of the legend are recorded in Cassius Dio's Roman History (40.27–28), Plutarch's Life of Crassus (32.1–33.5), and Florus' Epitome of Roman History (1.46.10). This episode clearly caught the attention of the illuminators of BnF fr. 17177 (see left, f. 187vb) and Pommersfelden, Schloss Weissenstein, Schönbornsche Schlossbibliothek, 295 (f. 209va), which depict the moment when the molten gold is poured down Crassus's throat (against a background of gold leaf!). Viewers of hit HBO series Games of Thrones might notice a similarity here with the way in which Viserys Targaryen, asking for a ‘golden crown’, has a pot of molten gold poured onto his head as punishment. In both the twenty-first-century television show and the thirteenth-century history, death by gold is a potent visual symbol of the dangers of greed and ambition. 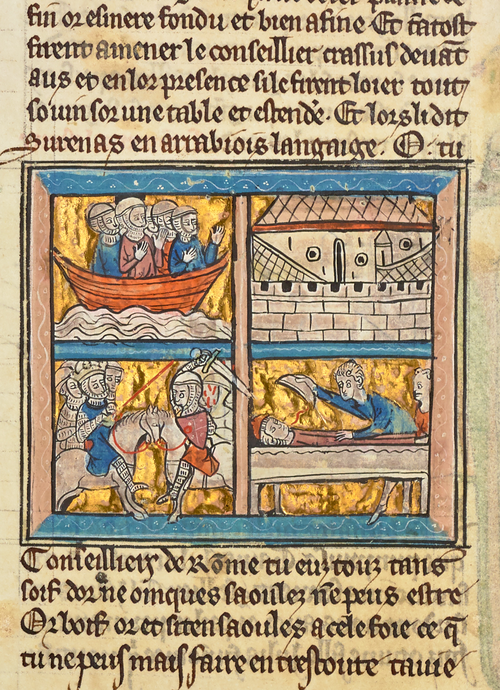