Would there be grounds for thinking of parts of the Histoire ancienne jusqu'à César less as 'history', and more as 'geography'? This question is intended to be provocative, and responds in part to what Keith Lilley identifies as 'the oft-repeated orthodoxy that the Middle Ages represents a geographic and cartographic lacuna in a western history of intellectual and scientific endeavour' (p.5). Yet knowledge of the natural world was both prevalent and regarded as important in the work of late antique and medieval writers, not only for the practicalities of navigating around an interconnected aristocratic world, but also for the study of scripture. Indeed other medieval texts display what one might term a 'geographic' approach to history, such as Thomas of Kent's Roman de toute chevalerie, Gossouin de Metz's L'Image du monde, and Marco Polo's Devisement du monde. The Histoire ancienne—differing from the above texts in terms of historical agenda and transmission—has a wide geographical coverage: from East to West the narrative moves, following a trail of toponyms that slowly leads the reader across the Mediterranean, ending up in Gaul as Caesar marches his armies in conquest.

Scholars have increasingly turned their attention to the presentation, preservation and expression of 'geographical' knowledge in Late Antiquity and the Middle Ages. The brilliant collection Mapping Medieval Geographies, Geographical Encounters in the Latin West and Beyond, 300–1600 (ed. Keith D. Lilley) offers a broad survey of varying premodern approaches to 'geography' across time and space. Chapter Two, 'Geography and memory in Isidore's Etymologies' by Andy Merrills, argues that the organisation and presentation of the 'geographical' sections in Isidore of Seville's huge text were influenced by the need for clarity and for effective memorisation. Isidore, Merrills posits, supplemented this geographical information with brief digressions 'of historical, linguistic or natural historical interest' in order to provide 'some depth to what would otherwise be an undifferentiated parade of names.' (p.55) 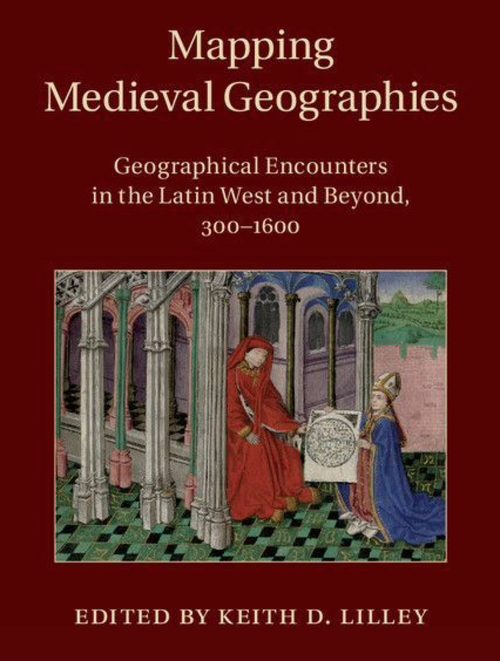 Mapping Medieval Geographies: Geographical Encounters in the Latin West and Beyond, 300–1600. Source: CUP

One of the examples that Merrills provides is a passage in Book IX, in which Isidore discusses how Persia came to be named:

[The Persians were named after King Perseus, who crossed into Asia from Greece and there dominated the barbarian nations with heavy and prolonged fighting. Right after his victory he gave his name to the conquered people.]

According to Merrills, this act of association is central to Isidore's approach to organising information, namely an 'etymological' one, but which also has an important mnemonic function: the inseparability of the nomen from the res allows for more effective recall, thus transforming the work from a reference text into a repository of knowledge stored in the human mind.

It is interesting, then, that this same piece of information appears in the Orient I section of the first redaction of the Histoire ancienne.

[And also at that time Perseus went from Greece into Asia, and there in one of those areas he crushed them in battle and so conquered a huge amount of land, whose many different inhabitants were vanquished and destroyed by him, and it was his name that he gave to Persia, the kingdom, and to Persians, the people.] 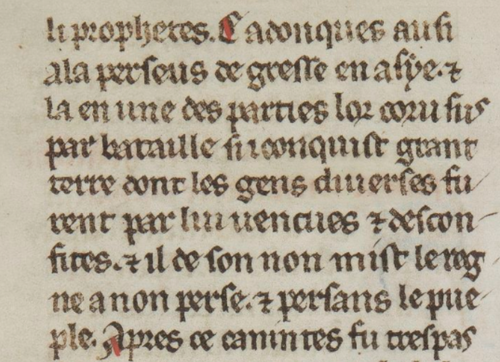 Prior to this excerpt, the previous six segments, in broad sweeps, describe: the invention of the first cart and chariot in Greece by Ericthonius; the treacheries of Busiris, king of Egypt; the journey of Phoenix and Cadmus from Thebes to Egypt; the rape of Europa by Jupiter; and the death of the prophet Moses. The expression 'en celui tans' (at this time) is continually repeated to stress the simultaneity of these 'historical' events. This quasi-synchronic view functions in a similar way to a geographical survey; the narrative lens moves quickly between different regions of the East in order to 'zoom out' on the geopolitical landscape. I would therefore argue that this section (§388) is in fact even more 'geographical' than the passage that Merrills evidences, which, when placed back into the Etymologies, actually relies on historical chronology as an organisational principle.

This 'snapshot' of the Orient at this point in the time almost functions cartographically, as various 'historical' events are positioned together spatially, rather than chronologically. Recent research in neurocognitive science has fuelled an emerging sub-field of anthropology, called 'narrative cartography'. This is the idea that landmarks and place names were vital components in the way that people, mostly in oral cultures, remembered routes or itineraries. The mnemonic association of place, person and narrative sequence has a double-economy: not only does it allow for the easier recollection of stories, but also it worked as a kind of map inside the brain, linking geographical locations together through the perceived movement of characters over a terrain. Christopher Collins, in a recent book that applies neurocognitive science to the development of literacy in Antiquity, inverts the term, referring to a 'cartographic narrative,' which he sees as the basis of the adventure tale or travel narrative. If, then, the employment of place names over the course of a text aids its memorisation, any such 'geographical' interludes (such as §388) have the essential strategic purpose to fill out the map created in the mind of the reader.

To end, I would like to show how some of the data the project team have collected through the encoding of BnF MS fr. 20125 – as Simone advocated in the last blog – might be used to support a speculative hypothesis such as this. In BnF MS fr. 20125, there is a total of 4,275 place names, with an average of 11.4 per two-sided folio. What is interesting is that the sections of the Histoire ancienne from Troy onwards (Troy–Eneas–Rome I–Orient II–Alexander–Rome II–Conquest) are largely consistent in their average number of place names per two-sided folio: between 10.9 and 14.3. The first four sections, however, show much greater variance: Genesis (7.8); Orient I (25.8); Thebes (5.7); Greeks and Amazons (17.5). Of course, Orient I and Greeks and Amazons are much shorter in length than the other two sections, and therefore perhaps cannot rely as much on pronouns to indicate places. Yet, it might also suggest that these short sections—compensating the relative dearth of place names in Genesis and Thebes—are much more 'geographical' in focus, with the secondary aim to add detail and depth to the reader's cognitive landscape, and thus allowing for a more effective retention and reproduction of the narrative described. 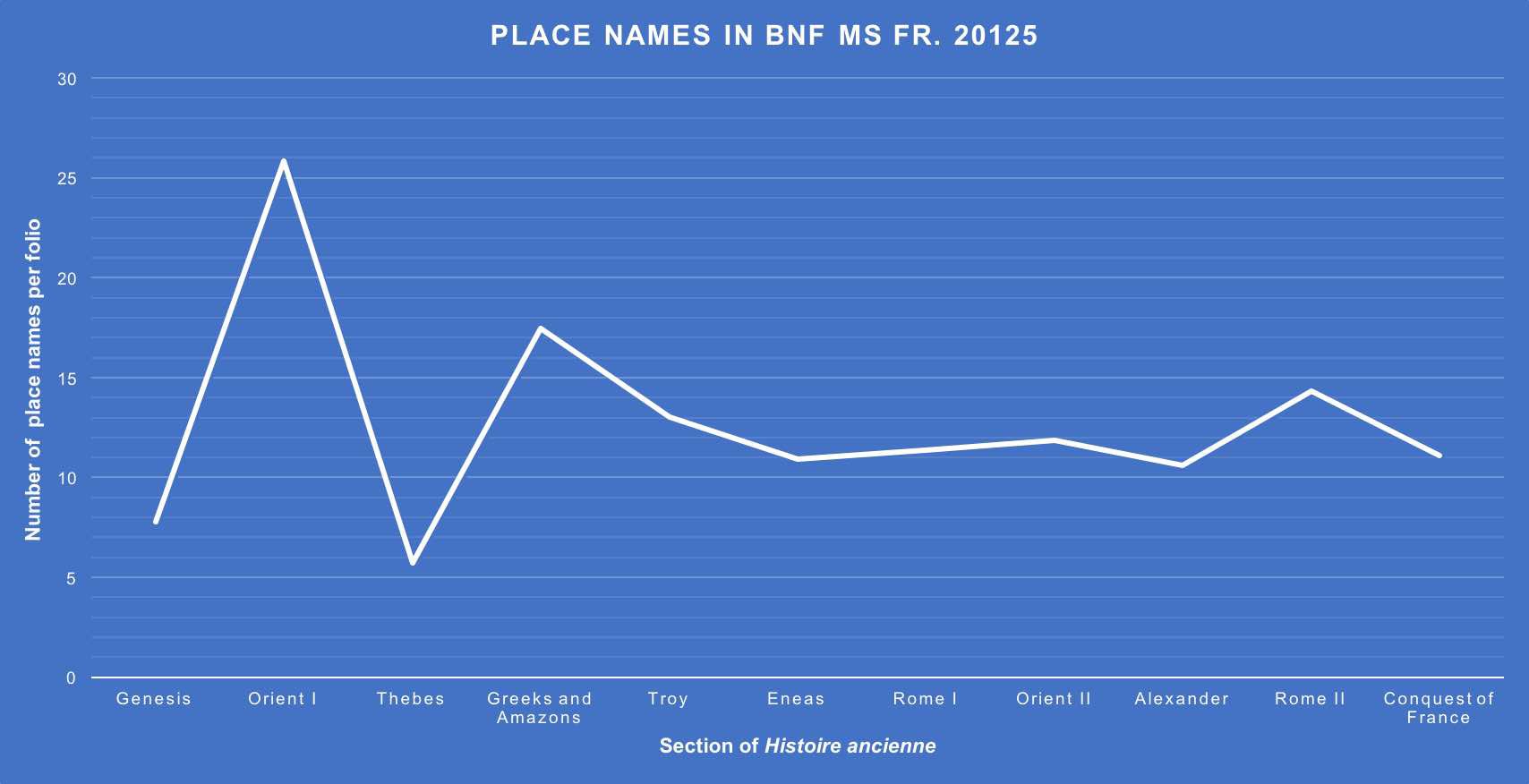 Graph shows the frequency of place names in the various sections of the Histoire ancienne as found in BnF MS fr. 20125.