Simon Gaunt rounds up the latest news from The Values of French and introduces Luca Barbieri's digital edition of Prose 5 in British Library, Royal D 20 I.

And when they learnt the truth about the great plague, they began to intone and make such a lament that all along the river bank one could hear no creature, but rather plaints and weeping and great shrieks.

The TVOF team, like all our readers we presume, is in lockdown. So far we are all safe and well and count ourselves as fortunate indeed that we are all confined in surroundings that are neither cramped nor unsafe, as is the case with so many, and as sheltered as it’s possible to be from the catastrophic economic impact of the pandemic : we sincerely hope all our readers are safe and well too, particularly those in France, Italy, Spain and the US caught in the eye of the storm. While these are unique and unprecedented experiences for most of us (though some of us at least will have painful memories of AIDS in the 80s and 90s), it is nonetheless perhaps salutary to remind ourselves that the human race has contended with epidemics throughout history. In the portions of the Histoire ancienne we have edited thus far, there are 48 instances of the word pestilence. Scanning these instances, one realises that pretty much every generation throughout Roman history had some experience of plague, and the same was true of much of the Middle Ages and early modern period of course. The Histoire ancienne tends to have a moralistic view of plague (particularly in pre-Christian times), but nonetheless the omnipresence of plague and epidemics in the past (and indeed elsewhere in the world) indicates the extent to which it is our own good fortune to be contending with this for the first time in our lifetimes. And maybe we in our first world modernity are the exceptions rather than the rule in having no cultural experience or memory of how to deal with a pandemic? So while we may be prey right now to ‘plains et plors et grans criees’, at least the advice we are following should be more effective than the conseil made to the Romans at one point in the Histoire ancienne to make sacrifices to their gods ‘por ce qu’il les garendesist de pestilence et de malaventure’ (§1051.2: so that they might protect them from the plague and from misfortune). 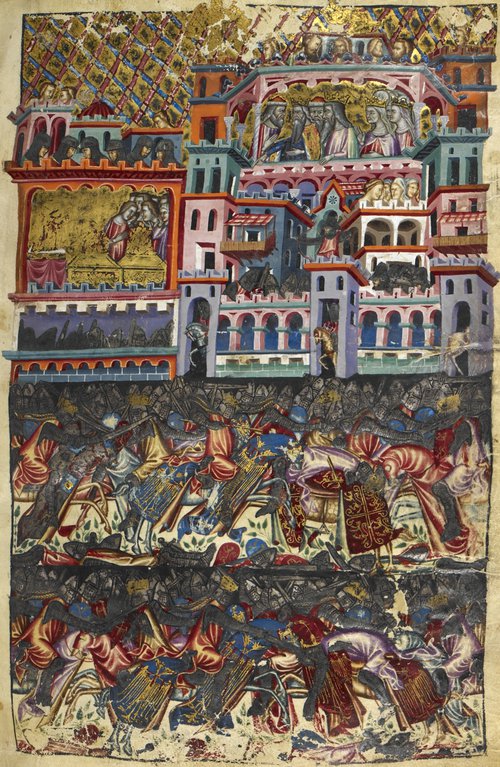 Over the last few weeks, working from home, I have often reflected and been thankful that the solitary life of the scholar (which sometimes I have cursed) gives me resources for occupying myself during these difficult times of enforced incarceration and also something to take my mind off what is happening outside. And more than once I have also thought of the late medieval Scottish poet Robert Henryson distracting himself from the bitter cold outside, from his chilblains and from the chilly drafts inside his northerly abode by sitting down at his desk to absorb himself in quires devoted to ‘fair Creisseid and worthie Troylus’, since we have been much preoccupied these last months with stories of Troy. We are truly delighted to announce the publication on our website of Luca Barbieri’s edition of the remarkable Troy section of Royal 20 D I, the second redaction of the Histoire ancienne, the so-called fifth mise en prose of Benoît de Sainte-Maure’s Roman de Troie (read more about the Royal manuscript here). 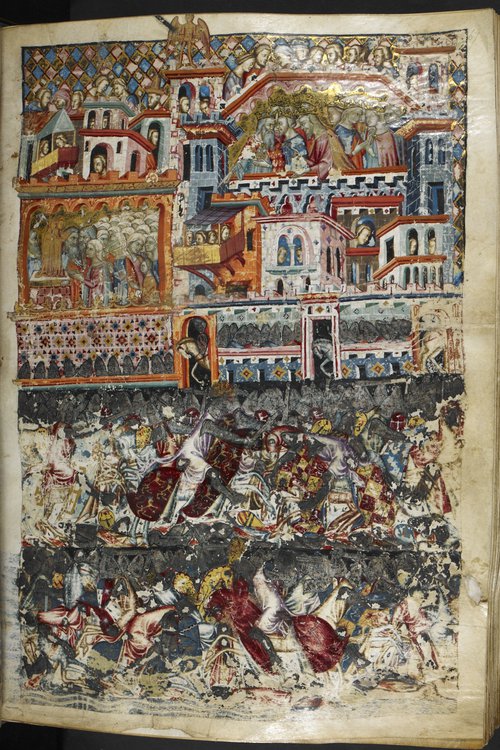 Prose 5 is a truly remarkable text on a number of counts. It is not, strictly speaking, an independent prosification of the Roman de Troie, but rather draws extensively on two previous mises en prose (Prose 1 and Prose 3). It also returns frequently to the Roman de Troie, integrates the earliest vernacular translations of Ovid’s Heroides into the narrative as letters exchanged by the protagonists, and draws on a range of other vernacular and Latin sources such as glosses to Ovid. One advantage of publishing this material in digital form is that there is no limit on the number or volume of notes, and that these can be displayed in pop-up windows without disrupting the flow of the text. Luca’s meticulous mapping of the Prose 5 author’s use of his sources in the notes to the text paints a truly fascinating and illuminating picture of a medieval writer at work with 4 or 5 books open in front of him on his desk, comparing them and switching sources (sometimes even in mid-sentence) to give the most comprehensive and to his mind most authentic and true account of the Troy story. In one of my favourite lines of medieval poetry Henryson asked ‘Quha wait gif all that Chauceir wrait was trew? (who knows if all that Chaucer wrote was true?) Of course, Henryson didn’t mean truth as in verifiable historical fact, but rather the truth of the story, poetic truth, hence his compassionate corrective to Chaucer’s treatment of ‘fair Creisseid’. Our Prose 5 author was likewise concerned to get at a truth to which he felt each of his sources did not do justice individually, so he set about the mammoth task of splicing together and condensing material from a range of different Troy books to create his own, one that was to have a remarkable posterity and resonance by virtue of being copied in Royal 20 D I in Naples, from where it subsequently travelled to Spain, then France, where it was copied several times, with the text probably then becoming an important source for other writers, including Chaucer himself (as Marilynn Desmond has argued).

The publication of Prose 5 is a major milestone of our project, but we also continue to publish segments of BnF f. fr. 20125: Rome I went on line a few weeks ago and with Prose 5 last week, Orient I also becomes available. By early May we hope to publish the Troy section of BnF f.fr. 20125 and the Greeks and Amazons section. By the end of May we hope to have completed the lemmatisation of all the material edited so far, which means the range of material available in Search will be doubled. Our aim is to complete the edition of f.fr. 20125 by the end of the funding period (August 2020) and to publish the remainder of the Royal manuscript in the following months. We also expect to add at least two complete manuscripts to Alignment (BnF f.fr. 686 and Vienna).

We are also pleased to announce that Henry Ravenhall, thus far our project PhD student, has submitted his dissertation and is now working on the project until the end of the funding period as a postdoctoral research associate. Finally, we are delighted to announce that we have been joined by Dr Natasha Romanova as a postdoctoral research associate, again to the end of the funding period. Henry will be working on our edition of the Alexander section in BnF f.fr. 20125 and Natasha on the Thebes section in f.fr. 20125 and Royal 20 D I.

Desmond, Marilynn. 2013. ‘The Translatio of Memory and Desire in The Legend of Good Women: Chaucer and the Vernacular Heroides’. Studies in the Age of Chaucer 35: 179–203