Thomas M. Greene in The Light in Troy: Imitation and Discovery in Renaissance Poetry (1982) argued that it was during the Renaissance that people began to conceptualise historical change and the danger of mixing different temporalities ('anachronism'). His central point was underpinned by the notion of the Middle Ages as spreading a 'diachronic innocence', a naivety that allowed, for instance, Aeneas to appear as a twelfth-century knight. Greene has been reproached by later critics for falling into the same traps as the Renaissance writers, who, as with most lingering conceptions of the 'medieval' period, engineered a step change over the 14th and 15th centuries to rationalise their own intellectual projects. Margreta de Grazia, in a seminal piece, sees this insistence on the medieval inability to perceive anachronism as a reflection of the modern scholar's attempt to control the object of study, by othering their a-historical space and by placing it in contrast to our heightened 'historical' consciousness.

It would be tempting to follow Greene's thinking when studying the Histoire ancienne. Even before reading the text, the illustrations come into sharp contrast with how we, as modern readers, visualise the historical matter being depicted. In Rome II, for example, the joust between Gneius Marius (Gaius Marius) and li rois iugurta (Jugurtha) is imagined more for its 13th-century audience, than as an 'accurate' historical representation of the described conflict:

There is no need to elaborate here why this illumination is not 'historically' accurate. Indeed, such a move is not useful, and contributes, as de Grazia argues, to this ideological tendency to cast the Middle Ages as historically naïve. Moreover, this kind of value judgement pre-supposes that we, in fact, have a correct 'historical' vision, of both 2nd century BC and 13th century AD military dress and technology. By asserting others' failure to historicise, we bolster the superiority of our own claim to write 'history'. Yet, what happens when we take a different approach to an illustration like this one? What happens if we see the illumination as an attempt to stage a 'meeting', or a 'joust', between past and present?

The illumination is framed as an empty space, since it is only the knightly figures and their steeds that are depicted. In a sense, therefore, it is already an impossible image, insofar as one cannot extricate individuals from their environment. The rind hooves of the horse on the right are actually outside of the frame, and its arched back suggest a sense of movement into the picture. The spear of the combatant on the left equally penetrates the border of the illumination. Could, in the absence of an ability to know what either historical figure was actually wearing, the illustration be consciously gesturing towards the present (13th-century knightly attire) filling, or moving into, the space of the otherwise pictorially un-representable past?

We might compare this to a passage found ten folios further on in BnF MS fr. 20125. In the context of the Social War (91–88 BC), Lucius Julius Caesar has just defeated the sanitiens (Samnites) and the lucaniens (Lucanians):

This passage is translated from Orosius' 5th-century Historiae adversum paganos. The relevant section in Orosius is reproduced below:

After he was named commander by his troops and had sent messengers to Rome to announce his victory, the Senate took off their sagas—this is the dress of mourning that they had put on at the beginning of the Social War—and, as hope smiled upon them, put back on the ancient elegance of the toga.

In modern depictions, Romans are styled in one of these two modes of dress: the militaristic (the 'saga', Latin: sagum), or the republican (the 'toga'). These have come to reflect two longstanding aspects of the legacy of the Roman Empire, as both a powerful, technologically-advanced and expansive armed force, and also as an intellectually, politically and philosophically 'developed' entity. In Orosius, as in other Latin texts, the sagum and the toga have social significance beyond systems of dress. The phrases 'saga sumere', 'ad saga ire', and 'in sagis esse' (as found in Cicero) all have the sense of 'to take up arms' or 'to prepare for war'. While descriptions of the Roman people as 'gens togata', or Latin theatre as 'togata', suggest the Romans' self-identification with a certain, non-militarised, ideal symbolised by the toga. Orosius draws upon this distinction to make a historical point about the consequences of Lucius Julius Caesar's victory, literalising—with the actual action of wearing garments associated with peace—what may have originally been in Orosius' sources a linguistic play. 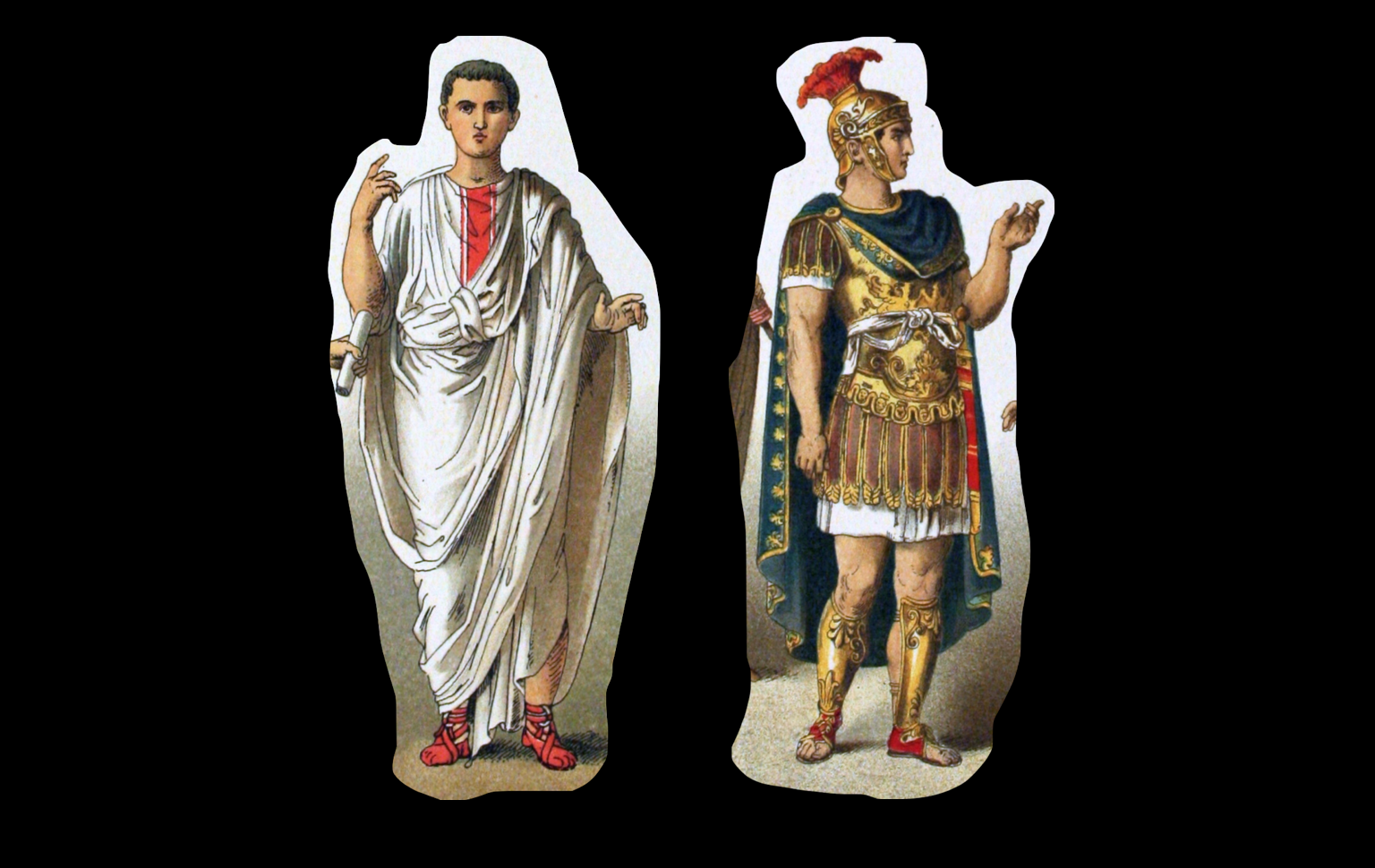 Images taken from Roman sections of 'Costumes of All Nations' (1882). Retrieved from Wikimedia Commons (https://commons.wikimedia.org/wiki/Category:Costumes_of_All_Nations_(1882)).

In the Histoire ancienne, however, something different is happening. The French translator foregrounds the idea of dress corresponding to a social or political situation, whilst placing the historical specificity (i.e. the name) in a subordinate clause. One might read this in the context of increasing sartorial regulations and a supposed constriction of the knightly class over the 13th century, thereby to suggest a keen relevance to the text's audience. More pertinently, though, it suggests an inversion of the hierarchy between past and present: by placing the 'uesteure de joie' and the 'uesteure de plor', which are not historically-bound, before their exact linguistic signifiers 'toga' and 'saga', which are, the translator perhaps encourages the audience to read their own system of dress—which would have made a similar distinction between wartime and peacetime apparel—into the narrative presented. This is not—as Greene would have it—to suggest an inability to distinguish between past and present, but rather a sophisticated strategy in which 'anachronism' is exploited to resolve a core epistemological problem.