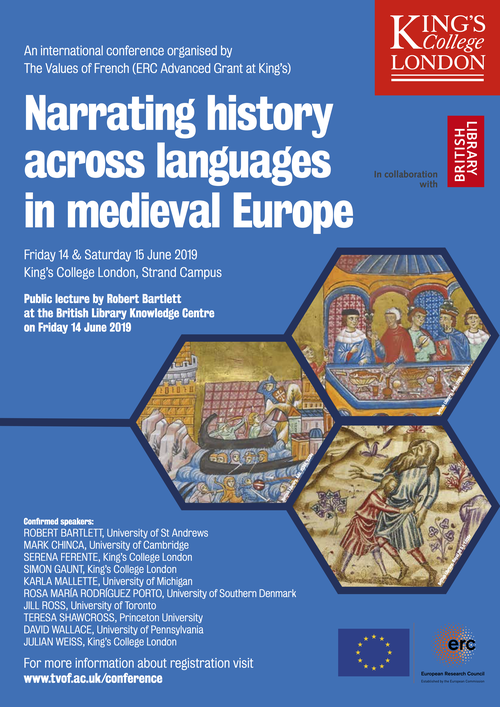 Narrating history across languages in medieval Europe is an international conference hosted at King’s College London and organised by The Values of French in collaboration with the British Library. The conference will consist of ten papers from speakers across a range of disciplines and languages. Focusing on the languages that were used to narrate history during the Middle Ages, we will ask questions not only about what the languages of history were, but also about the reasons driving these linguistic choices and about the places in which these languages were used. While ‘French outside France’, uses of French outside the ‘Hexagone’, is undoubtedly our primary area of interest, it is also our source of inspiration for investigating historiographic practices in other languages and in other contexts.

For the occasion, one of the British Library’s ‘treasures’ cases is housing two of the London manuscripts of the Histoire ancienne jusqu’à César, namely: Additional 15268 (made in Acre) and Royal 20 D I (made in Naples). These manuscripts, key to our project, are representative of the wide geographic scope of the Histoire ancienne jusqu’à César’s textual tradition, an inherently Mediterranean work which ‘travelled’ from France through to Italy and the Middle East. In addition to curating the exhibition case, our graduate students have also written a blog for the British Library's Medieval Manuscripts Blog. The British Library will host Robert Bartlett’s plenary lecture, which will also form part of its events programme.

This conference is supported by funding from the ERC and is also sponsored by the Centre for Late Antique and Medieval Studies at King’s College London.

A limited number of student travel bursaries are available.