Luke Sunderland is Associate Professor of French at Durham University and author of Rebel Barons and Old French Narrative Cycles. He is currently working on a book on medieval encyclopaedias.

The Livre des propriétés des choses (The Book of the Properties of Things) was a very popular late medieval encyclopaedia, a giant compilation of diverse authorities gathered to provide a guide to the universe and everything in it, covering the organization of the cosmos, the nature of God, the ranks of angels, the workings of the elements, the life of man and the unique qualities (or ‘properties’) of particular animals, plants and stones. The Latin original, entitled De proprietatibus rerum and written by Bartholomaeus Anglicus in the thirteenth century, was copied more than 300 times for convents, universities and private collections, inspiring King Charles V of France to commission Jean Corbechon to translate it into French. The translation was completed in 1372 and subsequently, the encyclopaedia became a cornerstone of the library collections of the Francophone nobility, with 45 surviving manuscripts, often beautifully illustrated. The dukes of Burgundy, Berry, Savoy and King Edward IV of England all owned copies. There were translations into other languages too, including English, Mantuan and Occitan.

The Livre was a meeting place of languages, firstly because it was translated from Latin into French. The translator’s prologue praises Charles for his love of knowledge: he has collected many books, says Corbechon, and has wisely ordered this book, which covers everything. A common opening image in Livre manuscripts is a four-part illustration (see right) where God creates the heavens, the skies and seas, and then the earth, before in the fourth image Charles V commissions the translation of the text into cler François (clear French). 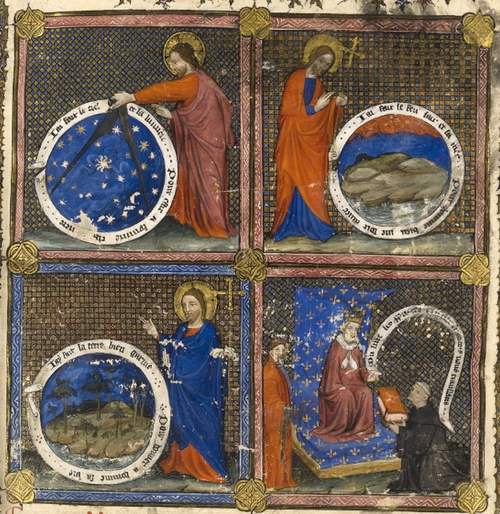 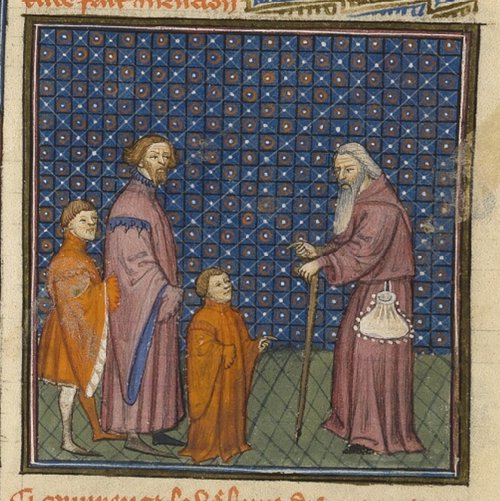 But the task of the translator was not so simple, as there was no pre-existing French into which to translate the text since French lacked equivalents for many Latin technical terms. Corbechon sometimes laments the state of French: for example, in describing the stages of human life, he says that there is petite enfance (early childhood), until age seven, and then comes what you call enfance in French (pueritia in Latin):

Norms are not always there to guide the translation task, and Corbechon ends up not so much translating into French as inventing French as he translates. There are many neologisms, such as the term nexions which renders the Latin notiones, meaning the qualities by which something can be known. There is, as Joëlle Ducos has argued, a lingering presence of Latin in newly-coined French terms with suffixes like -tion, -ive and -ique (for example corruption, generative), which abound in the Livre. Such neologisms are often attributed to Nicholas Oresme, who translated Aristotle’s texts for Charles V around the same time as Corbechon was working on the Livre, but they should perhaps be seen as part of a wider movement of innovation in French. Lack of a modern edition of the Latin or French versions of the Livre – editorial work on both is in progress, and the Occitan translation has recently been edited – means that we remain ill-informed about its contribution to the development of French. But it clearly features an encyclopaedic French that readily borrows from Latin, calquing and recreating Latinate forms within French.

Here the translations of the early medieval bishop Isidore of Seville’s etymologies represent particular challenges. Isidore’s book of etymologies was an encyclopaedia of its own fashion, since Isidore classified cultural and natural phenomena via explanations of the reasons for their names. Isidore’s etymologies carried great weight throughout the Middle Ages and form a vital part of the Livre’s discussions, often appearing at the start of individual entries. Dispensing with the etymologies would mean losing authority, but integrating them poses problems, since they rely on word play within Latin (Bernard Ribémont, who has translated excerpts of the text into modern French, reconstructs some of these puns). Corbechon sometimes either ducks the challenge, or hesitates to include too many Latin words in his text. Thus he says the fir tree contains no earthly element and can thus grow high, and that it is therefore called abies in Latin. Abies is close to abire (to move away from) in Latin, but Corbechon offers no gloss, instead turning to Aristotle who confirms Isidore’s etymology via an argument about matter: the fir tree’s light matter is easily sent upwards by its heat, and therefore it grows straight, with few twists. Similarly, on birds, Corbechon simply says that they called oyseaulx because they have no voie (path). Isidore puns on avis (bird) and avia (no path), but in Corbechon’s text the etymological link remains obscure since Latin is only an implicit presence. 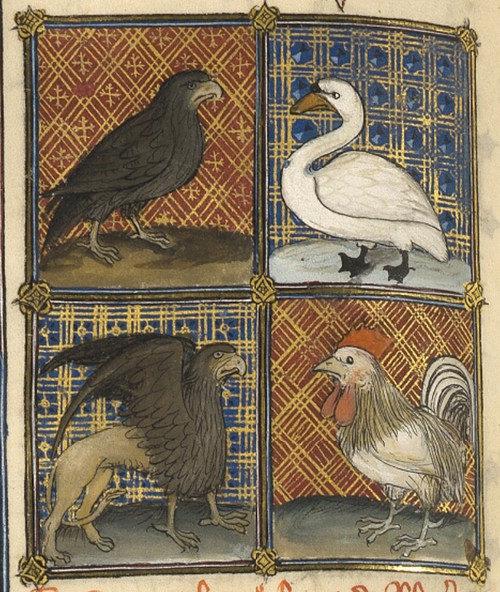 Latin affects the material more openly in examples where it determines alphabetical order. Thus the ram, or mouton, nonetheless appears first in the animal section thanks to its Latin name aries, which as Corbechon explains citing Isidore, comes from the pagan altars (ara) on which it was sacrificed. Here the presence of Latin allows the etymology and the place of the animal in the alphabetical sequence to be justified. Isidore’s etymologies often also go back to Greek, and in working through these Corbechon often has to make reference to Greek. The bay tree, or laurier is alphabetised under ‘d’ because of its Greek name dalphnus: Corbechon explains that this is why it might appear to lie out of alphabetical order. Only reference to Greek can make sense of etymologies like that of the emerald, which Isidore says is named for its colour: ameron in Greek means ‘green’ in Latin, explains Corbechon. Greek provides Corbechon with useful names for sub-species of snake and for particular types of cabbage, and names for flora and fauna in other languages are sometimes involved. When discussing the elephant, Corbechon gives both the Greek and the Indian names; a particular type of basilisk is said to live only in Ethiopia, and there are many references to Persia. Explaining the etymology of angel, on the other hand, entails reference to Hebrew. 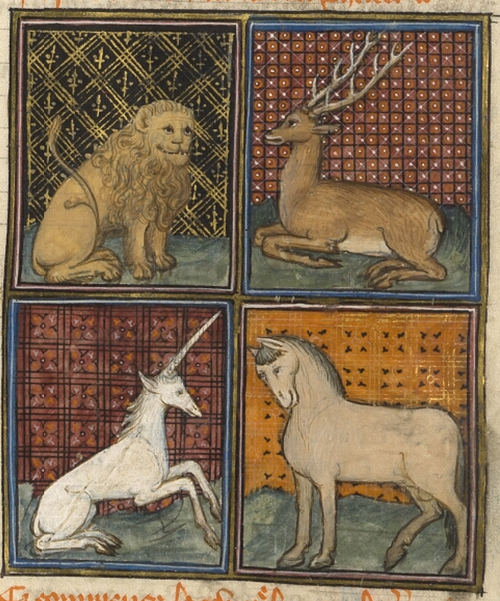 It was common in the Middle Ages to speak of the transfer of knowledge and power from one great civilization to the next. There were the Trojans, then the Greeks, then the Romans, now in the fourteenth century France is positioning itself as the coming intellectual and imperial force: Corbechon compares Charles V to Alexander the Great and Julius Caesar in his prologue. But what we see here is less a sequence and something more like the simultaneous presence of those other languages and cultures within French; this encyclopaedic French is a rather polyglot French. Arabic terms are occasionally used, and more broadly, Arabic cultures are always present. The Latin original of the encyclopaedia was the product of compilation that transcends the merely Latinate, with frequent citations of Avicenna, Averroes and many other Arab sources for medical and astrological knowledge. So is there an ‘encyclopaedic’ or ‘scientific’ French in the fourteenth century? Perhaps something like a koine develops in these acts of translation, and we can glimpse this in where the text went and alongside what it was read. The Francophone nobility who owned copies of this text also had other French ‘knowledge’ works. In the Burgundian collection, for example, there were also translations of Aristotle, Boethius, bestiaries and moralized bibles. In such works, negotiation between different epistemologies, sources and authorities was also a negotiation between languages, and French was therefore developing thanks to its own porosity, its capacity to absorb and refigure. The simplicity and clarity of Corbechon’s French translation is thought to explain its success, but the complexities of intercultural mediation are always there, just below the surface. His translation of the encyclopaedia allowed Francophone nobles to read the knowledge of the world in their own language, but this was a French that was always more than one language. Gathering in knowledge about ‘everything’ entailed opening up French to the diversity of the world. 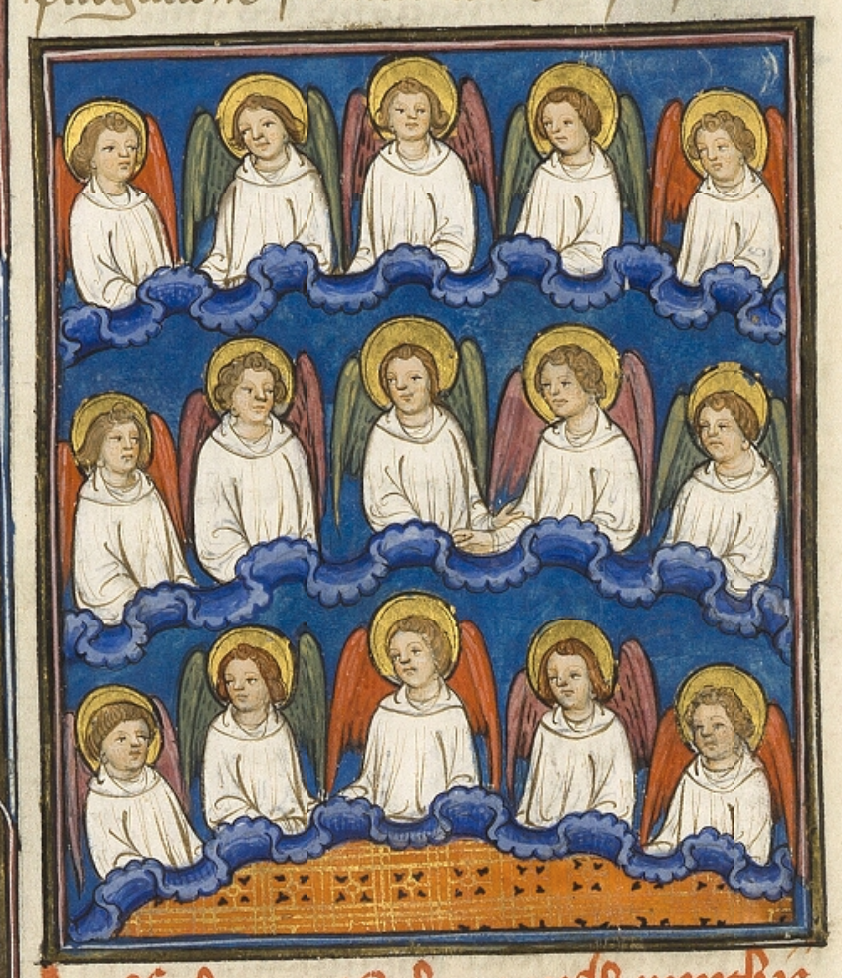