The Values of French Language and Literature in the European Middle Ages is a five-year research project running from 2015 to 2020 in the Department of French at King’s College London, funded by the European Research Council within the framework of an Advanced Grant.

The Values of French examines the nature and value of the use of French in Europe during a crucial period, 1100-1450, less in terms of its cultural prestige (the traditional focus of scholarship) than of its role as a supralocal, transnational language, particularly in Western Europe and the Eastern Mediterranean.

The project fosters collaboration between, and cuts across, different intellectual and national scholarly traditions, drawing on expertise in codicology, critical theory, linguistics, literature, and philology; it involves scholars from a range of European countries and North America, entailing empirical research around a complex and widely disseminated textual tradition vital to medieval understandings of European history and identity, the Histoire ancienne jusqu'à César.

This case study grounds and stimulates broader speculative reflection on two questions concerning linguistic identity. What is the relation historically between language and identity in Europe? How are cognate languages demarcated from each other? Indeed, its final aim, through and beyond its consideration of French as a lingua franca, is to interrogate that language's role in the emergence of a European identity in the Middle Ages. 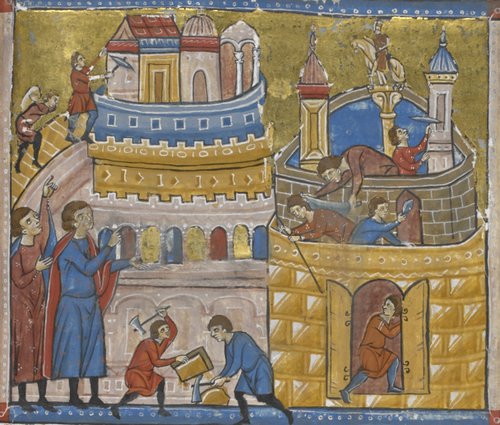 Miniature of the construction of Rome, from London, British Library, Add. 15268, f. 156r. Reproduced with the permission of the British Library Board.

The main objectives of The Values of French are: