Sarah Bowden is Senior Lecturer in German at King’s College London. She is currently writing a book about sin, confession and textual production in twelfth-century Germany.

The Emperor Charlemagne (742–814) plays a central role in the Kaiserchronik [Chronicle of Emperors], a monumental chronicle of emperors from Julius Caesar to Konrad III [d. 1152], written in Bavaria in the mid 12th century, and one of the most important pieces of European vernacular history writing. As the first ‘German’ emperor in Rome, Charlemagne provides the hinge for the translatio imperii – the ‘translation’ of the empire – from Rome to Germany that shapes the text and its conception of history. He is an excellent, powerful ruler with a close and direct relationship to God, and the episode about his reign concludes with a panegyric extolling his virtues.

Perhaps surprisingly, Charlemagne is also described as a sinner. Before the concluding panegyric, the text tells us that he has committed a sin so terrible he would rather die than name it. He goes to St Aegidius (St Giles) for help, who tries to absolve the emperor through prayer and the mass. Eventually, a letter is sent from heaven, gescriben âne mennisken hant (not written in a human hand, l. 15055), which miraculously offers Charlemagne absolution. The Kaiserchronik is not the only text that describes Charlemagne as having committed a terrible sin. In the reign of his successor, Louis the Pious, various texts circulated describing him burning in purgatorial fire as punishment for sexual misdemeanours; by the twelfth century his role as sinner becomes part of legends of St Giles – or St Aegidius in German – who helps the emperor to be absolved miraculously for a sin he cannot name. In later centuries the unspeakable sin becomes concrete: in the French tradition, it’s usually incest with his sister (resulting in the birth of Roland); in the German tradition a complex story of magically-influenced necrophilia and the threat of sodomy.

Why, though, did the poet (or poets – there may have been more than one, but for simplicity’s sake I’ll stay in the singular) of the Kaiserchronik include the unspeakable sin in his history of this emperor? There’s no reason to suggest he had to – Charlemagne isn’t always described as having sinned – and the Kaiserchronik poet makes it clear that he knows about other narratives of Charlemagne (15069–72), which implies a certain selectivity in the events he narrates and lets us assume he has chosen the material for his own work carefully. Perhaps it’s not the sin itself that’s important but rather the way in which Charlemagne is absolved from it miraculously with a heavenly letter, something that correlates with the focus on Charlemagne’s close and direct relationship with God throughout the whole narrative – yet the very fact of the sin cannot help but add touch of ambiguity to the portrait of this most ideal of emperors. Equally, it’s striking that one of the later recensions of the Kaiserchronik (recension C), which dates to around 1250 and otherwise alters very little of the basic material of the text, cuts the episode of the sin entirely.

The excision of Charlemagne’s sin from recension C may have something to do with changing attitudes towards confession between the mid 12th and the mid 13th centuries. From the Fourth Lateran Council in 1215 annual confession to a priest became compulsory for every Christian; before 1215, although acts of confession were widespread, they were not institutionalized. The rise of confession is often attributed to growing importance placed on self-exploration in reaction to sin, particularly contrition in reaction to sins committed. This sort of response seems hinted at in the KC when the miraculous letter states that anyone can be saved if they repent inwardly for their sins and trust in God. By the mid 13th century, however, when recension C was made, confession was formalized, so even though contrition remained important, acts of confession like the one described here – in which the sinner does not confess the nature of his sin and is not absolved directly by a priest – become even more problematic. It is surely no coincidence that there are no new rewritings of an unspeakable version of Charlemagne’s sin after 1215.

It’s this unspeakability that remains fascinating. Perhaps the topos of Charlemagne’s unspeakable sin points to a hidden tradition the contemporary audience would know about – but on the other hand perhaps what is important is the very fact that the sin isn’t revealed, a fact that leads us to an exploration of the power dynamics of confession and can tell us something about the way in which Charlemagne is presented as a ruler. Acts of confession open up a peculiar opportunity for exposing particular power structures and their ambivalences within narrative. The treatment of sin necessarily involves the establishment of certain constellations of power: the sinner’s power is both diminished in the face of divine power and judgement as well as, potentially, the power of the person to whom he confesses and who may dispense penance and absolution.

I want to finish this blog post by looking at one aspect of this in the Kaiserchronik’s treatment of Charlemagne’s sin. In the Trier Aegidius, a German vita of St Aegidius roughly contemporary to the Kaiserchronik, there is a subtle difference in the way in which Charlemagne’s unspeakable sin and miraculous absolution is treated. The Trier Aegidius makes it quite clear that the heavenly letter not only absolves Charlemagne but also reveals to Aegidius the nature of the sin committed; Aegidius holds this knowledge, and we as readers or listeners are repeatedly teased, almost taunted by what he knows and we do not. In the Kaiserchronik, however, the heavenly letter does not contain any information about what Charlemagne has done. Other than God, Charlemagne remains the only person to have knowledge of the sin he has committed and he is therefore able to be absolved without compromising his own worldly power. The lack of shared knowledge inherent in Charlemagne's confession points to a further element of its strangeness: it’s not really a confession at all. Dialogue is central to confession – a dialogue in which both the sinner and the confessor participate and which constitutes a performative speech-act of repentance and absolution – but here the great paradox is that, by refusing to utter the sin, Charlemagne performs a confession that is fundamentally not a confession. It’s striking that this moment of powerful silence occurs in the context of a chronicle that purports to narrate the lives and deeds of emperors; Charlemagne's refusal to narrate himself (both conceptually and audibly) seems rather ironic at the end of a passage that purports to narrate him, gesturing towards a self that has not been (and cannot be) revealed by the poet but is entirely in the hands of the (fundamentally unknowable) emperor himself and God. 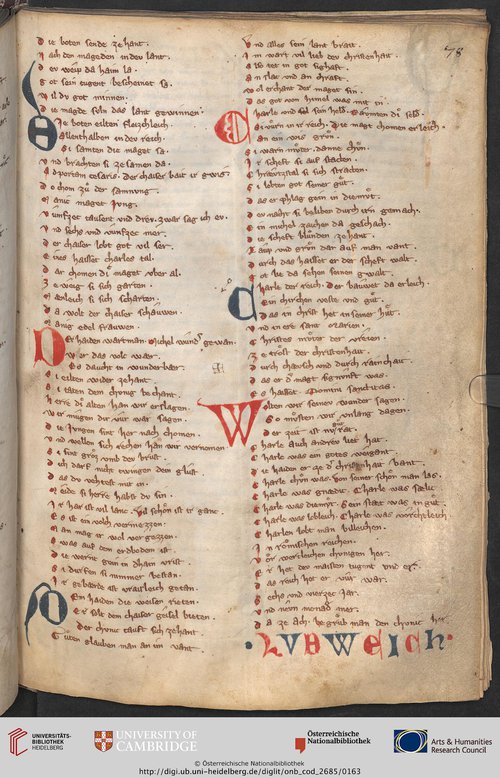 Vienna, Österreichische Nationalbibliothek, Cod. 2685, f. 78r. Source: https://digi.ub.uni-heidelberg.de/diglit/onb_cod_2685/0163. Early 14th-century MS of recension C. Here we see the passages directly before and after Charlemagne’s sin as told in recension A, but the sin itself is not narrated in this or any other MSS of recension C.