On 4 December 2021, our project leader Prof. Simon Gaunt sadly passed away. Simon was the heart of the TVOF family and became far more than a leader and mentor to each one of us.

Simon’s enthusiasm was contagious, gripping you in conversations over the intricacies of Old French syntax or his latest Netflix recommendations. He was highly efficient, but warm and full of playful humour. He would challenge without being condescending, always working to build up his students and colleagues. He looked out for us during difficult times and had a special gift for bringing people together. We are hugely grateful for the communities he created, including our core team as well as the TVOF seminar.

Simon permeates every output of this project, both intellectually and practically. He transcribed, encoded, and lemmatised more of the editions of the Histoire ancienne jusqu’à César than any other team member. He edited Troy (5) in Fr20125 and Orient II (8) in Royal, and alongside his other commitments in 2020, he added the editorial shorthand to the 117 folios of Rome II (10) in Royal as the pandemic took hold. 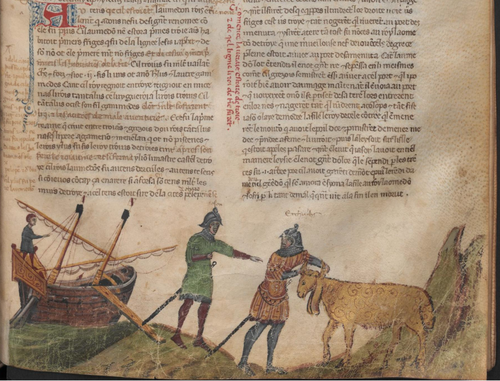 The final section of the interpretive edition of Royal (Rome II (10)) has now been published, as well as the accompanying lemmatised data in Search. Multiple updates and corrections have also been made to previously published data. Natasha Romanova has been leading the lemmatisation work and aligned a new Histoire ancienne manuscript with Maria Teresa Rachetta. The contents of Vienna, Österreichische Nationalbibliothek, Cod. 2576, one of the more complex and fascinating manuscripts of the tradition (see Rachetta 2019), are now available to consult in our Alignment tool (Vienna1 and Vienna2).

These new data complete the project’s website, which will continue to be maintained by King’s Digital Lab until the end of 2030 as Simon highlighted in the blog post he wrote last January. The project’s Figshare archive has also been updated; in addition to the XML files, it features complete PDFs of the editions and an archive of the table visualisation of Alignment in HTML.

TVOF’s other major outputs include the thesis of Henry Ravenhall, supervised by Simon and Simone Ventura, which he is preparing as a monograph provisionally entitled The Anachronic Manuscript: Voices, Networks, and History in a Medieval French Book. Additionally, there are forthcoming monographs by Maria Teresa Rachetta, on the Histoire ancienne's context of composition and manuscript tradition, and Simone Ventura on the language of the Histoire ancienne in the context of thirteenth-century French prose.

We are also in the process of editing a collection of essays by the TVOF seminar participants and a group of continental colleagues in honour of Simon, which we had hoped to present to him.

We lament that we cannot share these final milestones with Simon, but celebrate what he started and drove forward.

Simon’s contributions to the study of medieval French and Occitan over the course of his career re-shaped the field. The global tributes that have appeared in recent weeks bear witness to his ground-breaking scholarship as well as the admiration and affection felt by all those whose lives he touched.

Whilst coming to terms with his loss feels much too difficult to bear, we are and forever will be grateful to have had the opportunity to work in the glow of his intellectual energy and passion, his generosity and kindness.