Thomas Hinton is Senior Lecturer in French at the University of Exeter. His publications have focused mostly on Arthurian romance, Occitan lyric, and the French of medieval England. His current project, funded by an AHRC Leadership Fellowship, is Learning French in Medieval England: The Manuscripts of Walter de Bibbesworth’s ‘Tretiz’.

Learning French in Medieval England: The Manuscripts of Walter de Bibbesworth’s ‘Tretiz’ is a research project based at the University of Exeter. Its central aim is to produce a digital edition of a text known as the Tretiz, which dates from the mid-thirteenth century and has been attributed to an Essex knight, Walter de Bibbesworth. This glossary in rhymed verse sets out the French terms for a variety of topics, including childbirth and infancy, the names of various flora and fauna (which features an entertaining section on animal noises), and occupations such as cart-making and beer-brewing.

Seventeen manuscripts of the Tretiz survive, along with two later adaptations that can be considered more-or-less independent texts: Nominale sive verbale in Cambridge, University Library, Ee.4.20, and Femina (sometimes called Femina nova) in Cambridge, Trinity College, B.14.40. All the manuscripts bar one (London, British Library, Sloane 513) include glosses which are largely designed to offer Middle English translations of French words, and these vary copy by copy as regards the choice of words to be glossed and the content of a gloss – see Images 1 and 2 for examples of how the same line is rendered in two manuscripts. Each individual manuscript thus offers an independent programme of glosses.

At the same time, the principle of translation glossing appears to be written into the text from the start, to judge from a preface present in several copies, which announces that ‘tut dis troverez vous primes le fraunceis et puis le engleise amount’ (‘you will always find the French first and the English above it’) [Rothwell (2009), p. 1, PDF available here]. It becomes necessary to treat each manuscript as a distinctive version of a fundamentally bilingual text, which comes into being in the interaction between English and French. (Nor is this interaction wholly captured by the text-gloss relationship – English words are sometimes found within the rhymed verse, including at the rhyme, while some manuscripts include glosses in French.) In addition, there are significant differences between the text as given in individual copies. The transcriptions we have completed so far suggest a basic textual structure and order of topics that remains unchanged across the manuscript tradition. Within this basic structure there is a good deal of variation, with the text running from around 500 to around 1300 lines; individual copies reflect the differing priorities and linguistic interests of their creators and users, and the different uses to which the Tretiz was put. 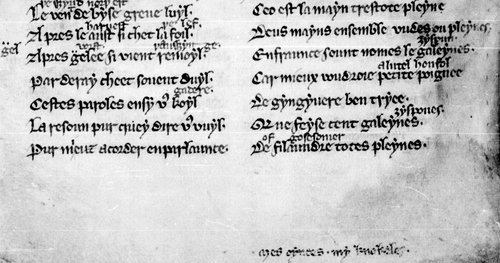 In the bottom margin of fol. 3rb of Add 46919, Herebert has added an additional gloss to supplement the existing vocabulary provided for the hands. Fol. 2va of the same manuscript records variants of the base text in French: the plural ‘Vos regarz sount’ is provided with the singular alternative‘ (vel) Voster regard est’, while ‘Vos eus sount jaciouses’ is accompanied by ‘(vel) Voster eul est chacious’.

London, British Library, Additional 46919 offers an interesting example of how the text’s nature is affected by the choices of agents in the chain of transmission. This early-fourteenth-century manuscript was partially autographed (including the Tretiz) by the Franciscan friar William Herebert (see Sarah Bridge's blog about preaching and this manuscript). His version of the text is the longest we have transcribed so far; almost every section features extra lines not found in William Rothwell’s 2009 edition, and additional lexical items are sometimes added in the upper and lower margins of the page – in image 3, you can see the word ‘mes oyntes’, glossed in English as ‘my knokeles’. This is also the only copy of the text that preserves both prefaces – other manuscripts include one or the other, or none at all. This concern for completeness goes right down to the level of individual words: image 4 shows a pair of lines for which Herebert has supplied variant readings, presumably taken from different copies. Elsewhere he records alternative translations for the same item in French: on fol. 12vb, for instance, ‘cheverouns’ is glossed as ‘sparres vel raftres’ (‘spars or rafters’) as part of a section on house-building. The impression given by all this is that Herebert had access to multiple copies of the Tretiz, and was keen to produce as complete a text as possible, making Additional 46919 a sort of critical edition avant la lettre.

London, British Library, Sloane 513 is another copy that forms part of a miscellany by or for a clergyman, in this case the fifteenth-century Cistercian monk Richard Dove. He was based at Buckfast Abbey in Devon, though it is possible that both he and Herebert may have encountered the Tretiz in Oxford – a number of the manuscripts seem to have connections to the city. Sloane 513 is the only Tretiz manuscript presented without glosses, something of a surprise when one considers it is one of the latest witnesses, apparently copied as part of a fairly elementary French-learning curriculum. (Other texts in this section of the codex include a glossary of numbers and days of the week, and a Donatus-style basic grammar of French.) Another late manuscript, Oxford, All Souls College MS 182, is one of the most heavily glossed, with whole syntactic units translated into English rather than occasional words as in earlier copies. 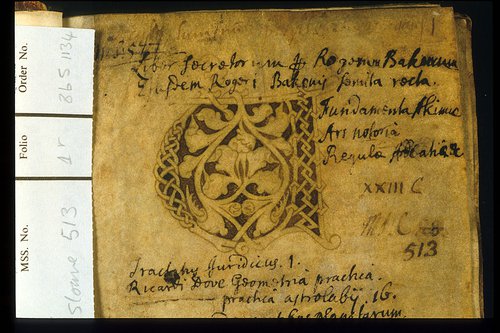 This raises a conundrum concerning Sloane 513 – how might a text as sophisticated and challenging as the Tretiz have functioned, unglossed, to teach French to students still grappling with the grammatical rules and basic lexis of the language, without the kind of scaffolding via English found in the All Souls text? One possible answer is that Dove supplied the translation himself as needed during a lesson, but it must still be acknowledged that the Sloane 513 text is an outlier in this respect. Indeed, its exceptionality in not transmitting glosses suggests a deliberate decision on Dove’s part to omit them from his copy. Such a hypothesis is strengthened by considering the unglossed Tretiz alongside another section of the same manuscript, which records a number of Latin riddles found in several English manuscripts; again, Dove’s copy is unusual in offering neither answers nor commentary on how to solve them. As Andrew Galloway notes, ‘the uninitiated reader of Dove’s list has no hope, and indeed several remain unsolved here.’ (‘The Rhetoric of Riddling’, 1995, p. 83). Does the lack of glossing on both Tretiz and riddles suggest a teacher whose personal manuscript becomes useable only when supplemented from his own memory – perhaps in order to reinforce his authority and mastery over his pupils?

As amply demonstrated by the TVOF project, TEI offers a powerful means of capturing a text as proteiform as the Tretiz. Indeed, we have already benefited greatly from discussion with the TVOF team; in particular, we are considering how their insights into lemmatisation might inform the design of our own text search tool. Because of the multiple constituencies we expect our edition to serve (textual scholars, lexicographers, linguists, historians of education), we hope to be able to make it as flexible as possible for isolating distinct layers of the text (main body; glosses; insertions or excisions) and making these searchable and comparable. Much work remains to be done over the coming months, and the restrictions mandated by the ravages of coronavirus have obviously required adaptations in our plans and working measures, but we look forward to making available the full manuscript tradition of this fascinating text in 2021. We will be providing regular updates on our progress on the project’s website and Twitter page, and warmly invite you to connect with us and follow our work.

Galloway, Andrew, ‘The Rhetoric of Riddling in Late-Medieval England: The "Oxford" Riddles, the Secretum philosophorum, and the Riddles in Piers Plowman’, Speculum, 70 (1995), 68-105.

See also the Resources page on the Learning French in Medieval England website.