Back in February, we published our interpretive edition of the Histoire ancienne’s account of early Roman history (Rome I) in Paris, BnF, f. fr. 20125. One of the more unexpected turns in this section concerns the intrusion of British history into the narrative. After the establishment of the Republic, the Histoire ancienne pays special attention to the figure of Brutus, the first consul, who is depicted in a number of the Acre-related manuscripts before § 664. 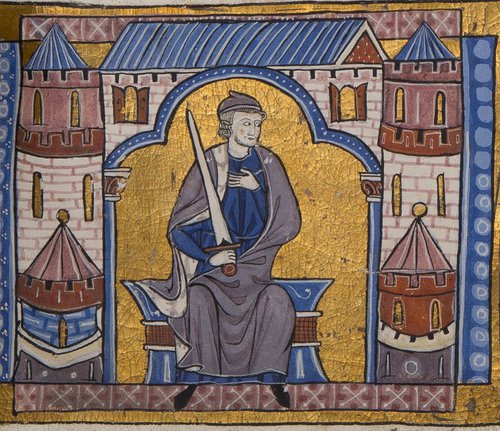 Following the description of Brutus’ death, a genealogy (§ 665.7-8) traces his descendants back to Noah and identifies him as the origin of the name of Britain:

[And know that before I tell you more about the Romans, I will discuss who this Brutus was and his lineage, [he] who was so full of wisdom and courage. He was from the line of Japheth, the son of Noah, this I want you to understand. For from Japheth descended Ivan, and from Ivan Jobaath, and from Jobaath Baath, and from Baath Izrau, and from Izrau Ezra, and from Ezra Ra, and from Ra Abir, and from Abir Oth, and from Oth Aurthach. Aurthach engendered Mair, and Mair Simeon, and Simeon Fetebir, and Fetebir Alanus, Alanus Hessitio. Hessitio engendered Brutus, whose genealogy you hear. After this Brutus was Britain first named and declared.]

After the genealogy, the narrator pursues this topic, elaborating on the peoples and rulers of Britain before Brutus, beginning with the Scythians. They settled in Spain, then travelled to Ireland before arriving in Britain (§§ 665.11-666.1). Prior to their arrival, four kings from ‘Poitau’ (i.e. the Picts) ruled the land (§ 666.2-4). After Brutus, seven Roman emperors followed, the first being Julius Ceasar (§ 666.7-8). The next paragraph (§ 667) moves on to discuss seven British kings and the Christianisation of Britain, the Saxon invasion led by Hengist, and then the subsequent reconversion of Britain by Saint Augustine and Saint Paulinus. Then the narrative returns to the Romans and the period following the death of Brutus.

Guy Raynaud de Lage (1948) suggested that the source of this interpolated section was the Harleian version of the Historia Brittonum (London, BL, Harley 3859), a ninth-century historical compilation on the history of Britain. Indeed, the Histoire ancienne posits ‘li Estorie des Bretons’ (the History of the Britons, § 666.5) as a source in this section. The Historia Brittonum played a key role in establishing the myth of Brutus as founder of Britain. Yet, it is via Geoffroy of Monmouth’s Historia Regum Britannie that the myth became more widespread (see Summerfield 2011).

In Paris, BnF, f. fr. 17177, a late thirteenth-century manuscript of the Histoire ancienne, we find the unique copy of the earliest French prose translation of Geoffrey of Monmouth’s Historia regum Britannie interpolated between the sections on Eneas and early Roman history. Hannah Weaver’s blog on this striking compilation highlights the discrepancies between the origins of the eponymous founder of Britain in the Estoire de Brutus and the account in the Histoire ancienne, as well as their different narrative approaches to tracing descent. In Fr17177, the reference to the ‘li Estorie des Bretons’ (§ 666.5) cited above becomes ‘ainsi co[m] lestoyre de Brutus ra[con]te’ (just as the story of Brutus recounts, 113va), despite the incongruences between their accounts.

The Historia Brittonum, Geoffroy of Monmouth’s source, represents a much earlier compilation of ambiguous and conflicting accounts of ‘Brutus’ the founder of Britain. He is first mentioned as a consul in reference to the naming of Britain: ‘Brittania insula a quodam Bruto, consule Romano, dicta’ (Faral 1929, § 7). Then, a few paragraphs later, another source is cited (‘In annalibus autem Romanorum sic scriptum est’, Faral 1929, § 10), which describes ‘Britto’, a descendant of Aeneas, who is also identified as the source of the name of Britain: ‘Et postea ad istam pervenit insulam, quae a nomine suo accepit nomen, id est Brittaniam, et implevit eam cum suo genere, et habitavit ibi.’ (Faral 1929, § 10). It is this version, of his Trojan origins, that Geoffroy of Monmouth develops in the Historia regum Britannie. 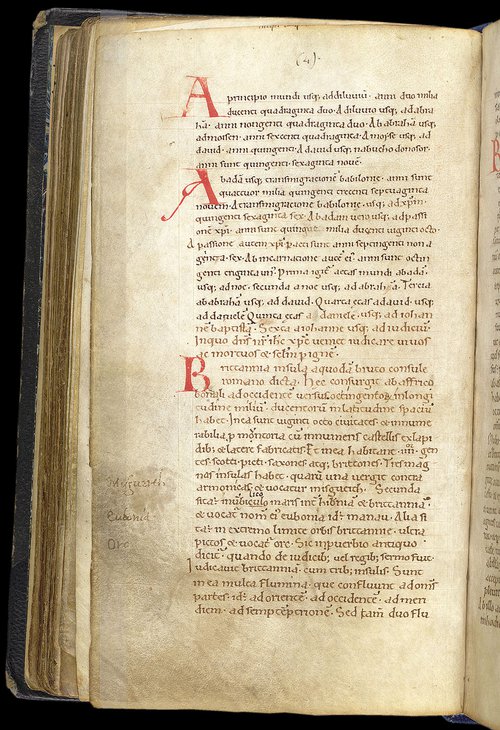 The manuscript containing the earliest copy of the so-called ‘Harleian Recension’ of Nennius's Historia Brittonum. London, British Library, Harley 3859, f. 174v. Reproduced with permission from the British Library Board.

The Histoire ancienne’s genealogy of Brutus (§ 665.8) actually combines the names in two different genealogies in the Historia Brittonum. The first is the alternative genealogy of the descendants of Alanus at the end of § 17:

The second appears in the next paragraph and traces Brutus back to Japheth via the Trojan line of Ascanius and Eneas:

The genealogy of Alanus at the end of § 17 in the Harleian Historia Brittonum becomes the genealogy of Brutus in the Histoire ancienne, but in chronological rather than reverse order.

These revisions of the Historia Brittonum are not, however, the innovations of the Histoire ancienne’s compiler. There is an intermediary between these two works which contains the same version of the Brutus genealogy as the Histoire ancienne: the Liber Floridus by Lambert, a canon of the Chapter of our Lady in Saint-Omer. Compiled at the beginning of the twelfth century, the Liber Floridus, or ‘Book of Flowers’, draws on hundreds of different sources from the late antique and early medieval periods, including the Venerable Bede, Isidore of Seville, Orosius, as well as the Historia Brittonum. This Latin 'encyclopaedia' is composed of a heterogeneous mix of text, lists, genealogies, illustrations, diagrams and maps, idiosyncratically ‘organised’ by Lambert (see Derolez 1998). The incredible autograph manuscript, held by Ghent University Library (MS 92), reveals various stages of composition up to its completion around 1121. Lambert's work reflects a strong local interest and in particular the important role of Flanders in the First Crusade.

Our seminar member Francesco Montorsi (2016) was the first to identify the Liber Floridus as a source of the Histoire ancienne in his analysis of the genealogies at the beginning of the Eneas section (Fr20125 §§ 589 and 591). At our workshop in 2018, Francesco provided further evidence of the need to look at possible intermediaries for the earlier sources in the Histoire ancienne, and it is thanks to his work that we have been paying particular attention to the influence of the Liber Floridus.

The Liber Floridus contains an abridged version of the Historia Brittonum (ff. 68v-73r). The genealogy of Brutus corresponds both to the arrangement and content in Lambert’s text:

This is one of several textual details that link the account of Brutus and the history of Britain in the Histoire ancienne to the version of the Historia Brittonum in the Liber Floridus (for more details see the source notes, Fr20125, §§ 665-667). Indeed, why would our compiler stop when there were more lines of descent to translate from the Latin text before him? A digression into British history proved altogether too tempting.

Whilst the overall structure of the Histoire ancienne is largely Orosian, Lambert's Liber Floridus could arguably be claimed both source and inspiration for the recurrent genealogical insertions slotted throughout the text. We are yet to appreciate the full extent of the influence of this Flemish encyclopaedia on the Histoire ancienne. Disentangling the palimpsest of sources offers an opportunity to gain a better understanding of its emergence in time and place.

Derolez, Albert. 1998. The Autograph Manuscript of the Liber Floridus. A Key to the Encyclopedia of Lambert of Saint-Omer, Corpus Christianorum Autographi Medii Aevi (Turnhout: Brepols)