In this guest blog post, Hannah Weaver, Ph.D. candidate at Harvard University, tells us about a unique manuscript of the Histoire ancienne jusqu'à César and the implications it has for temporality and history. Hannah's research explores manuscript interpolation in early vernacular histories of Britain.

The manuscript BnF fr. 17177 (now available to compare with other Histoire ancienne manuscripts using the TVOF Alignment tool) presents a substantial variation on the first redaction of the Histoire ancienne. In this copy, the earliest continental French prose translation of Geoffrey of Monmouth’s Historia regum Britannie is inserted just after the Eneas section – you can read about the material insertion in Maria Teresa Rachetta's blog post. The Histoire ancienne curiously lacks any information about that great king, Arthur; it is perhaps this absence that motivated the insertion of Galfridian material. A different British history, plausibly translated from the Historia Brittonum, does appear in a few chapters of the universal history, however. Because of this other British material, the text that results from the interpolation of the Estoire de Brutus within the Histoire ancienne generates a number of contradictions, deferring the task of providing a coherent British history to the audience.

The very Brutus whose history is interpolated into the Histoire ancienne in BnF fr. 17177 proves to be a slippery character. Is he a Roman consul, as the Histoire ancienne posits, or a descendant of Aeneas, as the Estoire de Brutus insists? Is he in Britain on Roman business, or does he arrive in Britain with other exiled Trojans to fulfill a prophecy of Diana by settling there? Is he killed by Tarquinius’s son in the heat of battle, or does he die peacefully after ruling Britain for twenty-four years? BnF fr. 17177 offers the reader all of these choices; one could be forgiven for wondering if the name Brutus refers to two different people. The text forecloses that option, however, by insisting in both cases that this is the Brutus after whom Britain is named.

The contradictions extend beyond simple choices between alternatives to the manner in which the narrative is constructed. The British section of the Histoire ancienne presents a genealogical vision of time. The mention of Brutus’s death at the hands of Etargus Tarquinius provokes a narrative intervention that presents the consul as a descendant of Noah. 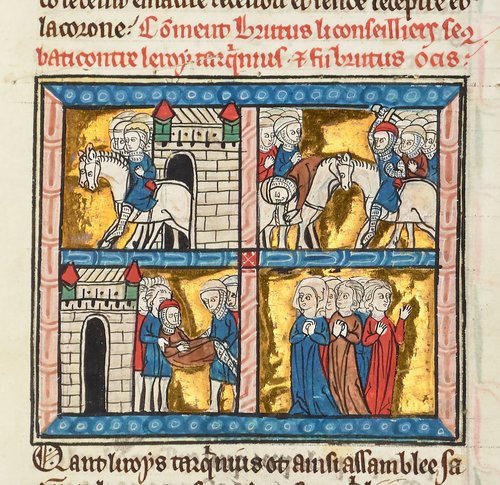 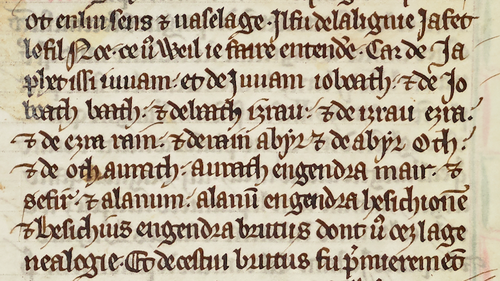 In a list of fifteen ‘begats,’ Brutus is linked to a distant Biblical ancestor. His nobility is assured by a connection to the lineage of Noah, hero of the Hebrew Bible and prominent figure in the Genesis section of the Histoire ancienne. Brutus is defined by generations of patronyms; in keeping with the Christian morality that the author of the Histoire ancienne imposes upon pagan history, Brutus’s lineage marks him as a proto-Christian.

In the Estoire de Brutus, on the other hand, the resolutely secular Brutus is the great-grandson of the Trojan Aeneas. We learn this not through a list of patronyms, but in a straightforward narrative.

[At last, when Aeneas died, Ascanius became king … and fathered a son called Silinus, who secretly loved one of Lavinia’s nieces and got her pregnant. And when Ascanius learned of this, he ordered his mages to find out whether she was pregnant with a male or female child. They searched for the truth of the matter, and they said that she was pregnant with a child who would kill his father and mother, and after searching in many lands, he would become a very honored king. The prophecy in no way failed, for when the woman gave birth to him, she died in the process. He was given to nurse and called Brutus. When he was fifteen years old, he went hunting with his father and killed him with an arrow…] 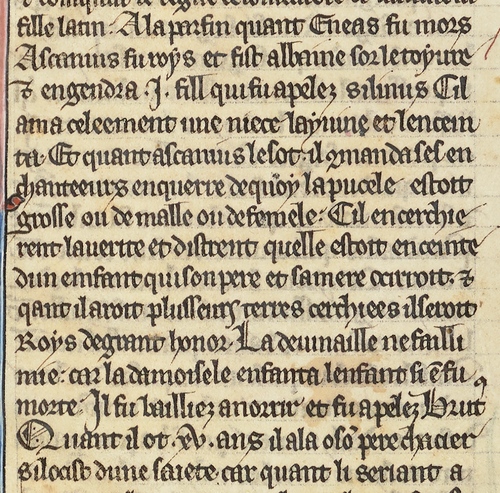 While this passage is not devoid of genealogical interest, its relationship to time differs substantially from the British section native to the Histoire ancienne. For one thing, we begin at the beginning: rather than hearing of Brutus for the first time at his death, we witness his conception and even glimpse his future proleptically. The mages’ prophecy lends a typological force to Brutus’s life: the prompt fulfillment of their more sinister first prognostication foreshadows the ultimate accomplishment of the second. The history that follows is authorized by the process of fulfilling this original prophecy: in the Estoire de Brutus, Brutus is worthy of narrative attention because of his life’s fidelity to a prenatal prediction. In the Histoire ancienne, on the other hand, Brutus merits a narrative digression because of his genealogical link with Biblical figures. The hybrid text in BnF fr. 17177 asks its readers to evaluate these two strategies of authorization, rooted in divergent relationships to time and in moral connections to Christ.

While the interpolation of the Estoire de Brutus inside the Histoire ancienne is unique, other manuscripts exist that compile Galfridian material with the Histoire ancienne. These compilations bear witness to the popularity of the Historia regum Brittanie and its most essential hero, Arthur. There is a sense that universal history must make room for Geoffrey’s vision of imperial Britain. But they also put into place contradictions: like the earlier Latin historian William of Malmesbury, famous for reporting more than one version of events, the scribe of BnF fr 17177 amasses as much material as possible and leaves it to the audience to decide which vision is most accurate. 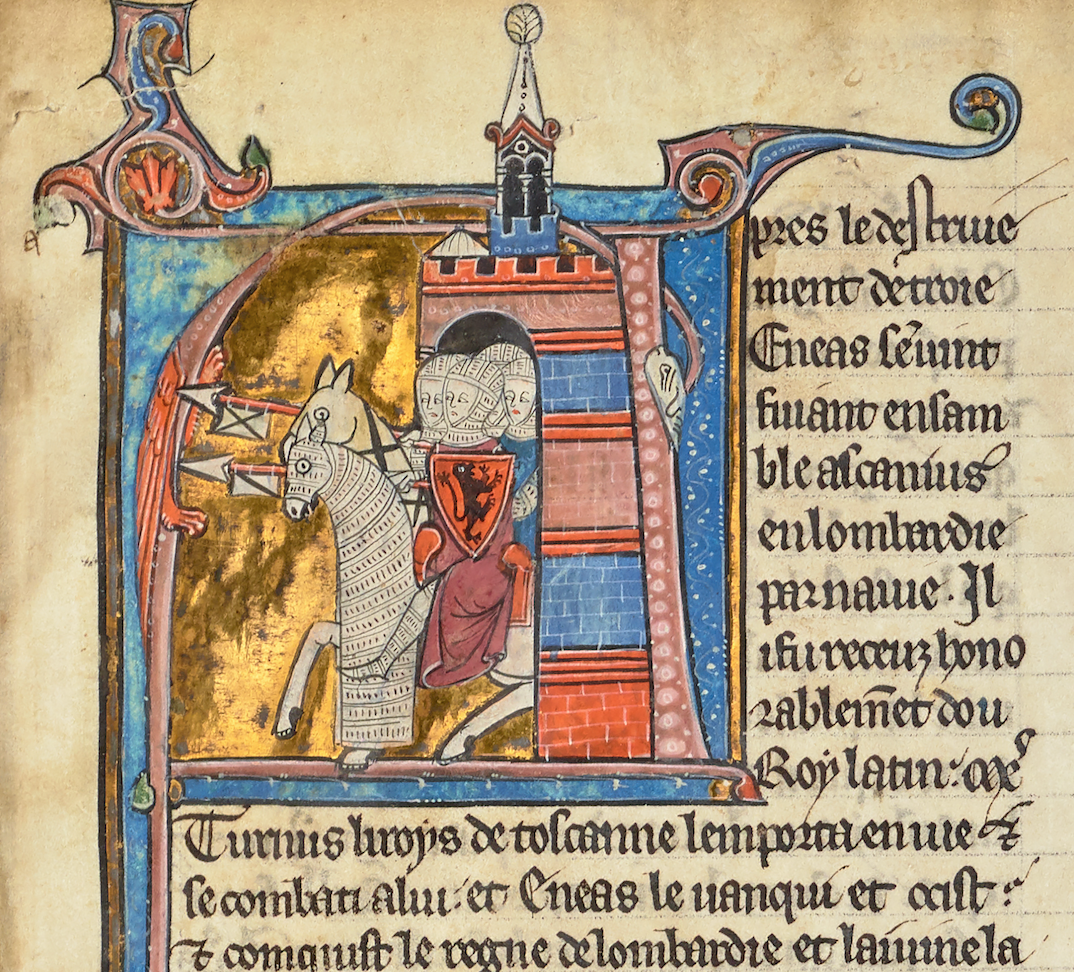