My first blog post, published in July 2016, concerned the re-use of the Roman de Thèbes (in its Picard rewriting known as the version courtoise) in the Histoire ancienne jusqu’à César. It captured my early reflections on a subject that has truly obsessed me over the years: the relationship between twelfth-century French narratives in verse and early-thirteenth-century prose compilations. I was interested in how French writers designed two radically different typologies of historical narratives in a two-generation span of time (from circa 1150 to circa 1230). Did any intellectual continuity between these two generations exist? How were the earlier texts transmitted to the younger generation? What of the earlier production did the younger generation like or dislike, and why? More generally, I am interested in studying how they treated historical subjects and found different balances between the necessity of producing appealing and gripping accounts and respecting their ancient sources.

Both twelfth-century and early-thirteenth-century authors refer to their works as estoires, a category that encompassed different kinds of narrative. This word reflects the use of historia in contemporary Latin writings on poetics, such as those of John of Garland, where it designated any narrative involving a third-person narrator. But in classical and patristic texts, the Greek/Latin word historia also meant a reliable account of ancient deeds deriving from witnesses’ reports. Reliable and prestigious historical narratives (that I call here ‘histories’) were in meta-poetic terms just a sub-genre of narrative (that I call here ‘stories’). However, the absence of a binary opposition between the two discursive genres did not mean that the activities behind them were similar. On the contrary, authors were well aware of the specificity of their methods, and keen to mark explicitly the difference towards their predecessors.

As I pointed out in a 2017 blog, the author of the Histoire ancienne often focuses on the developments of the art of war during the ancestral ages. According to a view that he seems to share with his public, ‘historical’ texts are expected to contain accounts of battles and detailed descriptions of individual military feats. When, in the early sections of the compilation, he can’t provide the names of those who distinguished themselves, he justifies that by stating how in earlier times military practices did not require knights to engage in single combat. In 2017, I explained that medieval audiences expected to read the names of the valorous as a consequence of their familiarity with the chansons de geste, a genre that was certainly influential in the construction of the discursive strategies displayed in the Histoire ancienne. Now, I can add further details to this picture by illuminating the considerable difference between this approach and that marking the redaction and the transmission of probably the most influential twelfth-century historical narrative, the Roman de Troie. 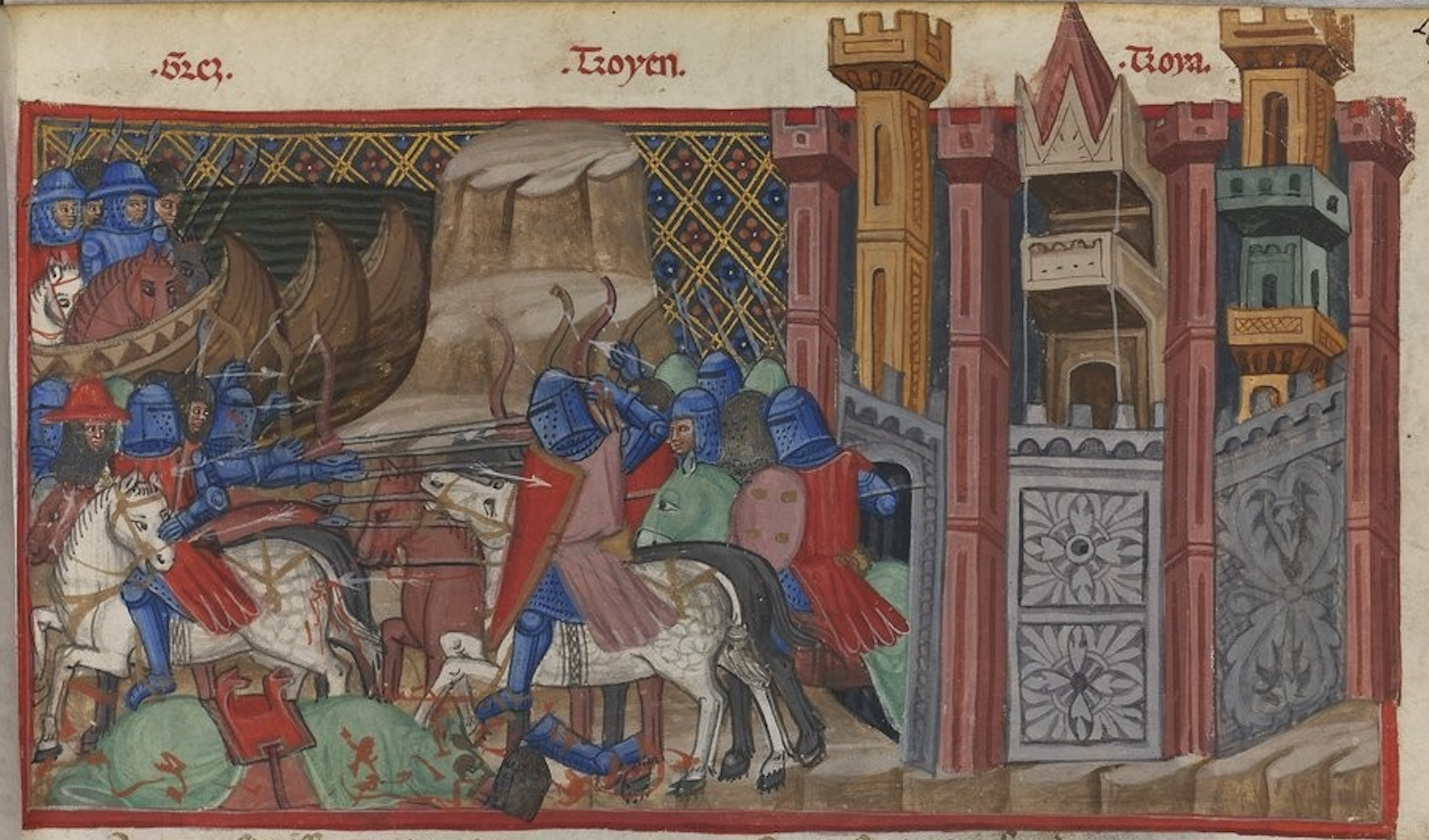 Benoît de Sainte-Maure’s Roman de Troie is a verse adaptation of a fifth-century Latin text, Dares Phrygius’s De Excidio Troiae. De Excidio Troiae is a short text, lacking any rhetorical embellishment and containing mostly description of battles, duels and killings. Though Benoît’s rewriting contains also a good deal of non-military scenes (which are among the best-known and most appreciated sections of the roman), it still focuses mostly on accounts of battles. These accounts display both a scrupulous respect for the information contained in the Latin source, which are always faithfully replicated, and an ostensible enjoyment in their enhancement via the addition of scenic details, fictional background information and new characters.

A good example of Benoît’s technique of amplificatio is found in his treatment of Memnon, a secondary character of the Excidio who acquires heightened importance in the Roman de Troie. In the Excidio, Memnon appears twice. Firstly, in the list of the allies of Troy in Chapter 18, where he is named along with Perses and both are said to be Ethiopian (de Aethiopia Perses et Memnon); secondly, when he is killed by Achilles in Chapter 33, where he is incoherently qualified as ‘the leader of the Persians’ (Persarum ductor). In the Roman de Troie, Memnon and Perses (whose name is changed in Xerses) become nephew and uncle, and the latter is qualified as king of the Persians. Xerxes is numbered among the heroes preparing for the second battle at Paris’s side. During the eleventh battle, he loses his life and is mourned during the following truce by his close friend Paris and by his nephew Memnon; at the end of the passage, Benoît adds that Xerxes had a wife and two sons who will inherit his kingdom. During the nineteenth battle, Memnon is called a king (le reis Mennon, v. 21458) and leads the Persians. After Memnon’s death, there is no reference to a succession of any sort. Though limited and sparse, these fragments of a family history contribute significantly to the richness and depth of Benoît’s representation: the two Persians display the greatest valour, and their relationship with Paris is among the liveliest representations of bonds of trust between the leaders of the Trojan side. It is probably not a coincidence that Benoît added a portrait of Memnon in the gallery of the Trojan heroes which opens the account of the war (vv. 5493-5505), in spite of his absence in the corresponding section of the Excidio. This is a great honour, one which Memnon shares only with Polydamas. 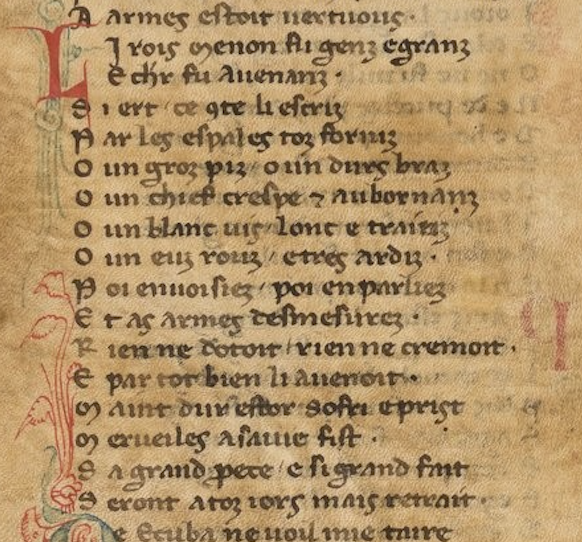 The portrait of Memnon among the Trojan heroes in the Roman de Troie; Paris, BnF, NAF 6774, f. 28v. Source: Gallica.bnf.fr.

Strangely enough, however, an unnamed king of Persia appears also in the gallery of the Greek heroes:

The portrait of the king of Persia among the Greek heroes in the Roman de Troie; Paris, BnF, NAF 6774, f. 27r. Source: Gallica.bnf.fr.

‘The king of Persia was very big, both very wealthy and powerful. He had a fat face and freckles; his beard and hair were red’.

This passage, found without significant variants in all the extant manuscripts, caught the attention of the editor of the Roman de Troie, Léopold Constans, who rightly noticed that the kings of Persia Xerxes and Memnon fought on the Trojan side. The corresponding passage in the Excidio actually speaks of Merion, a Cretan hero who also appears in the Roman de Troie fighting on the Greek side:

‘Meriones was auburn-haired, of moderate height, with a well-proportioned body. He was robust, swift, unmerciful, and easily angered’. (trans. Frazer 1966)

How did Merion become a Persian king in the opening section of the Roman de Troie? The most probable explanation involves a confusion made by an early scribe due to the similarity between the Old French forms of the names Memnon and Merion, Menon and Merion, which could appear virtually identical in some medieval scripts. The entire tradition of the Roman de Troie seems to derive from a copy produced in a context where people were very interested in the correct identification of the characters and where someone had provided the text with marginal gloss containing further information on the heroes portrayed at the beginning of the account. In this early copy, the marginal gloss li reis de Perse had been mistakenly copied close to the portrait of Merion instead of that of Memnon. In a subsequent copy, the gloss replaced the name of the Cretan. The entire extant manuscript tradition derives from this faulty transcription. Since no ancient glossed copy of the Roman de Troie survives, this small but unambiguous hint reveals that the contemporaries of Benoît provided their copies of the Roman de Troie with glosses helping to navigate its narrative complexity and richness. Those readers and scribes, who were most likely very much aware of the originality of Benoît’s work in comparison to the Latin sources, liked and cherished his creative talent.

Benoît was a talented writer of a type which is very alien to our modern experience: in his practice, the display of narrative talent was fully compatible with the respect for the source’s information. He did not need to challenge or revise the ancient materials, but still he was fully at ease in using any available strategy for making them more gripping, lively and psychologically deep. His vision of the ancient world was as accurate and erudite as was possible, and his sources were up to date. But its vernacular discourse found its raison d’être primarily in the quality of its narrative craft. In this sense, he was an author of ‘stories’.

Seventy years later, the author of the Histoire ancienne wrote for a public that most likely knew the Roman de Troie and shared the taste of its earliest scribes. His adaptations of ancient sources are always very faithful and do not involve narrative amplifications. In this respect, his practice is in strong opposition to that of the twelfth-century adaptors of ancient sources (including Benoît and also the anonymous authors of the Roman de Thèbes and the Roman d’Enéas). However, he does not polemize openly with them. On the contrary, he tries to educate his public in ‘history’, a different narrative tradition where accounts of individual exploits are subordinated to a closer fidelity to the source material. It is certainly not by chance that the first occurrence of the world ‘historiographer’ in French occurs in the Histoire ancienne, and in the context of one of the apologetic passages on this matter (§ 371.2, historiographiein ; see the DEAF). Particularly significant is the Greek suffix -ephien, which communicates the centrality of the cultural and textual heritage bequeathed by the ancients to the author of the Histoire ancienne. 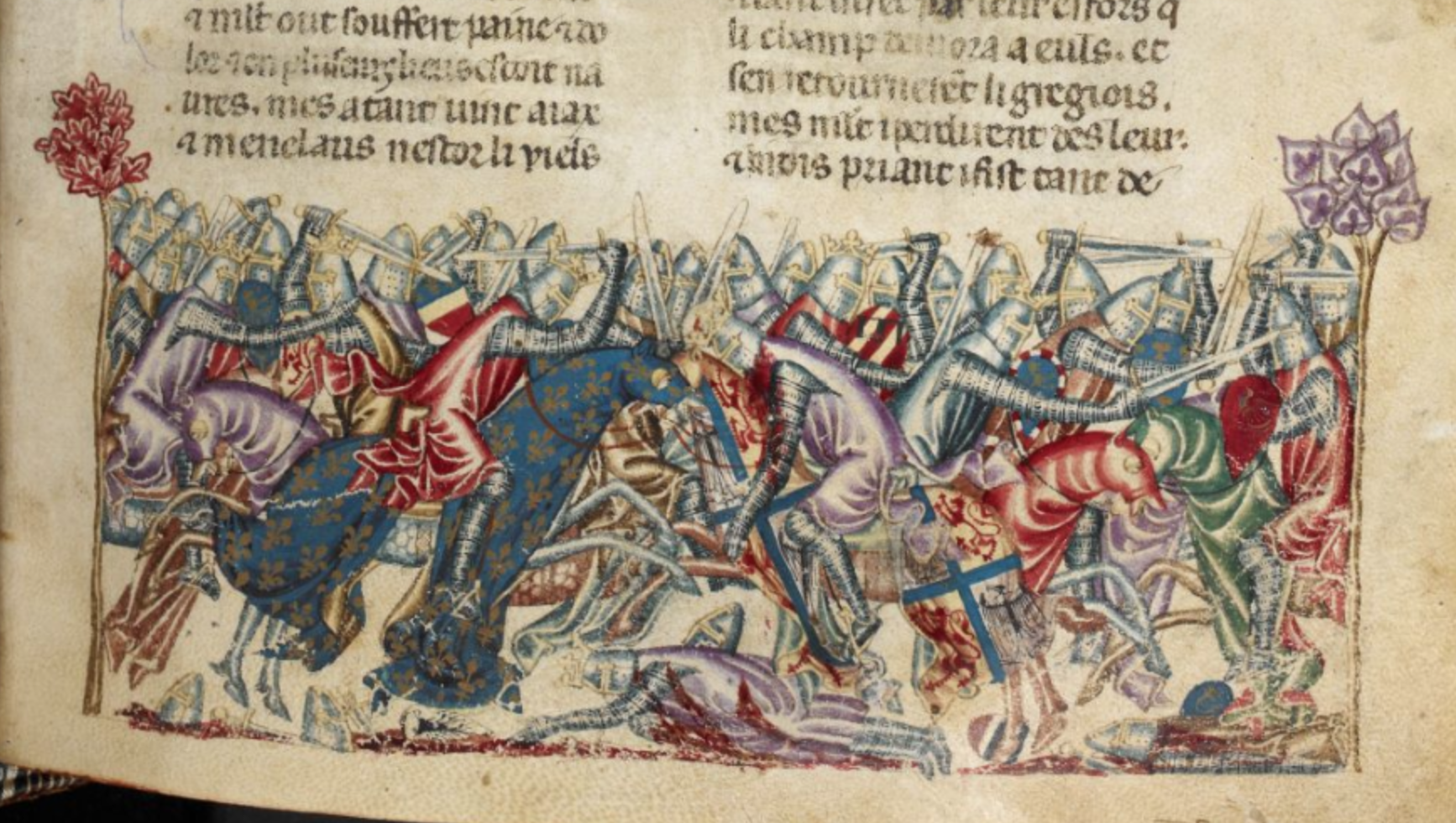 Clash of knights at the siege of Troy; Histoire ancienne (second redaction), London, BL, Royal 20 D 1, f. 118r. Reproduced with the permission of the British Library Board.