In addition to the Genesis and Thebes sections, our interpretive edition of the Alexander section of the Histoire ancienne is now available to read on our website. Its editor, Henry Ravenhall, introduces the text and picks out three aspects of how Alexander the Great is represented.

There were few historical figures in the Middle Ages – and indeed in the modern period – as well-known as Alexander the Great. In the Alexander section of our text, the thirteenth-century Histoire ancienne jusqu'à César, the Macedonian king is an important and multi-faceted character, at the head of what medieval thinkers considered one of the four great world empires. This text circulated widely in medieval Francophonia and, crucially, presents an altered portrait of Alexander compared to the earlier Roman d'Alexandre and to the compiler of the Histoire ancienne's primary source material, Paulus Orosius's Historiae adversus Paganos, a history of the pagan world written in the early fifth century. As Catherine Gaullier-Bougassas has shown, the Histoire ancienne partially retains some of Orosius's criticism of Alexander, while also reducing its acerbity and incorporating some of the more ‘romantic’ elements of the legend. The Alexander of the Histoire ancienne, in short, represents the careful work of a medieval compiler concerned with both the veracity of his account and holding the attention of a lay audience familiar with earlier texts on the pagan heroes of antiquity (for more on this, see Maria Teresa Rachetta's blog post on Troy here).

How the compiler of the Histoire ancienne navigates between different representations of Alexander is truly fascinating. Most of the Alexander section is translated from three widely-attested Latin texts: 1) Orosius's Historiae adversus Paganos; 2) Julius Valerius's Epitome; and 3) the Epistola Alexandri ad Aristotelem. There are also important borrowings from Petrus Comestor's Historia scholastica and the vernacular tradition, namely the Roman d'Alexandre. The Epistola, a supposed ‘letter’ written by Alexander in the first person addressed to his tutor Aristotle, occupies a significant chunk of the text (paragraphs 803–814 and 817–837). Although the Epistola is considered spurious today, its reliability in the Middle Ages is evident in Lambert of Saint-Omer's inclusion of the text in his twelfth-century Liber Floridus (pictured), which has its own connections to the Histoire ancienne (as Hannah Morcos outlines in her recent post). For more information on the intricate interlacing of source materials, see the source notes to our interpretive edition and Gaullier-Bougassas's excellent research (see bibliography below). 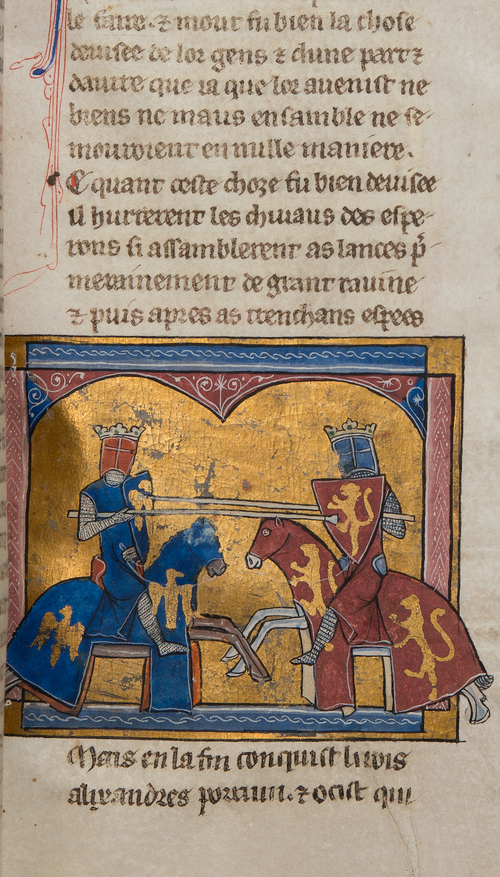 But what did the Histoire ancienne's readers and listeners make of Alexander? The compiler sets up two contrasting opinions:

Lords and ladies, many people recount and say that Alexander had all the good qualities of honour, kindness, generosity and courtesy, but Orosius, who is very much to be believed, says and testifies that he was no less cruel and terrible to his brothers, his loved ones and relatives than he was to foreign enemies.

The text goes on to describe Alexander's execution of a number of his officers, as well as his quarrel with Cleitus, who made the mistake of negatively comparing Alexander's achievements to those of his father, Philip II of Macedon, and was thus slain. The Histoire ancienne translates Orosius's criticism:

Thus Alexander was never sated unless he spilt human blood, whether that be of his enemies, his companions or his noble household.

Throughout the Histoire ancienne, the compiler doesn't shy away from contradiction between popular perception seemingly rooted in oral tradition (often signalled by the formula ‘many people say that...’) and the written accounts of Latin sources.

More often than not, however, factual inconsistencies are subordinated to more pressing religious or moralistic truths. Rather than trying to discern Alexander's exemplarity (or lack thereof), the Histoire ancienne finds in the Macedonian a ripe opportunity to explore other issues, as we shall see below.

The Histoire ancienne attempts to rationalise the polytheism of Alexander, seeing in him a prefiguration of a Christian warrior-king. This is most apparent when Alexander comes to Jerusalem after defeating the Persian king Darius III (as told in Petrus Comestor's Historia scholastica). The High Priest of the city, Jaddus, upon hearing of the Macedonian's arrival goes out to greet him dressed all in white and holding a golden tablet carrying the name Yahweh in Hebrew characters (§791.4). To everyone's amazement, the pagan Alexander kneels before Jaddus and the tablet. His officers and companions express their surprise that

such a high-standing, rich and powerful man – whom all the peoples of the East, and kings and queens of Persia, Greece, Macedonia and many other kingdoms, worship and bow before — should kneel before a poor man who follows a different religion to his own. 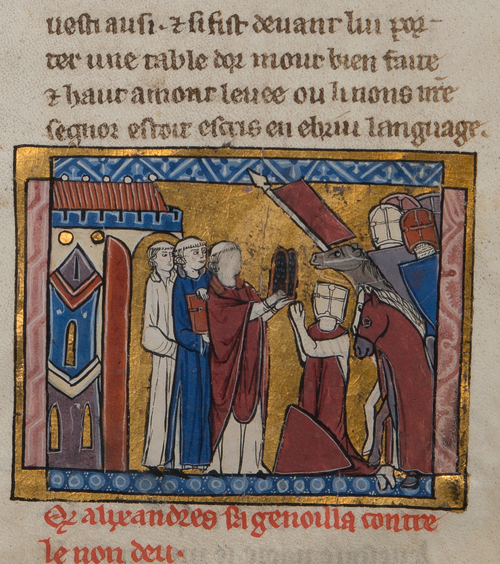 When Alexander is challenged by Parmenio because of this, he replies that the Christian God, taking the form of the High Priest, appeared to him in a dream and told him that he would conquer the whole world. This Christian God, Alexander says, ‘told me a truth greater than anything our gods have done’ (§792.5). The Histoire ancienne then transitions into a moralisation about how all Christians should humble themselves before God (§793). The narrator tells his audience:

by God, consider/behold how you honour His ministers, who serve Him night and day out of love and fear for Him.

The imperative ‘esguardés’ (consider/behold) at once prompts inner reflection on how Alexander's actions demonstrate Christian values, but also directs the reader to an illumination of the scene that accompanies several manuscripts of the Histoire ancienne (and indeed the Prose Alexander, see Mark Cruse 2011, p. 154). Dressed in thirteenth-century armour and facing three tonsured individuals, Alexander is in BnF fr. 20125 textually and artistically (pre)figured as a model Christian leader recognising the spiritual authority of the Church. 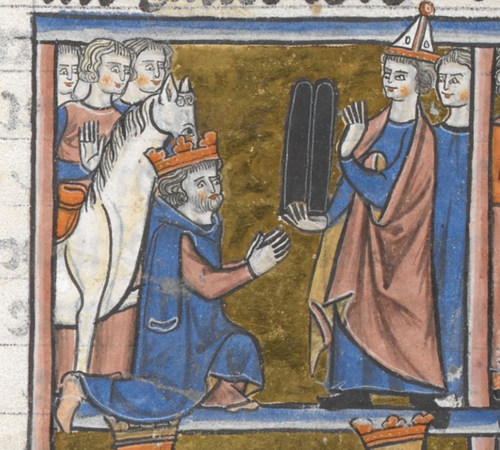 Alexander kneels before the name of God, BL, Additional 19669, f. 148vb. Reproduced with permission from the British Library Board.

Alexander as victim of fate and fortune 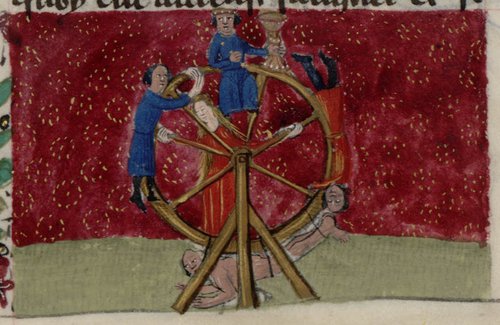 The pagan world in the Histoire ancienne is unstable, violent and beset by catastrophe. A trope inherited from Orosius, the notion of war and death being caused by a lack of faith is expressed most explicitly in the Rome II section (§921.8). Peace and the Christian faith go hand-in-hand in the ‘golden age’ (tans doré) that the compiler of the Histoire ancienne recognised in his own epoch.

In the Alexander section, the compiler introduces the ubiquitous figure of Lady Fortune with her wheel, who elevates some to power and great heights and, in so doing, lowers other to misery and infamy (§796.2). Alexander's rapid rise to imperial dominance is thus counter-balanced with the promise of his future fall, as Lady Fortune takes away what she once gave: ‘the worldly riches of this world, and with them, one's life’ (§796.2).

Alexander's demise is foretold again but more explicitly in an encounter with two sacred trees, one representing the sun and the other the moon, during his travels in India. This episode (§828–§836) is translated from the Epistola and had a wide reach in the Middle Ages (see Clarck Drieshen's British Library blog post).

Alexander kneels before the sacred trees. BL, Additional 15268, f. 214v. Reproduced with permission from the British Library Board.

This is an exciting part of the narrative and the moment when the trees announce their prophecy is given plenty of suspense. The guardian of the trees, a hideous man ten-foot-tall, tells Alexander how the trees are bilingual in Greek and ‘Indian’ (§832.3) and instructs the king to ask them a question under his breath. Alexander asks:

if he would ever return alive to his mother Olympias and to his sisters in Macedonia after having conquered the whole world.

To Alexander's surprise, the answer is that while he would rule the world, he would never see his family again (§834.1–2). Later that night, he returns to the trees, pushing for more details. The reply:

‘The end of your time approaches, since in a year and nine months' time – without fail – you will die in Babylonia, and they – whom you do not suspect – will kill you with poison.’

These are some of the most emotionally engaging passages in the Histoire ancienne, as the text stresses the grief Alexander and his companions feel upon hearing his forthcoming murder. Several paragraphs later the trees' prophecy is proven to be accurate: two of Alexander's favourites, Antipater and Divinuspater, give him a poisoned drink during a banquet (§849.1–2). Alexander's death as foretold implicitly by the Wheel of Fortune and explicitly by the sacred trees allows, on the one hand, the Histoire ancienne to emphasise the instability of the pre-Christian world, and, on the other, to join together its two main sources, Orosius and the Epistola.

Alexander as lover and love-object

By this point in the Alexander of the Histoire ancienne (§840), the Macedonian's fame has spread. Candace, ‘who was so beautiful that one would struggle to find a more beautiful creation in the world’ (§840.5), becomes so infatuated with Alexander that she orders a master sculptor to create an ymagene (image, statue) in his likeness (on idols in the Histoire ancienne, see Francesco Montorsi's post). The result is astounding; it would be impossible, the text says, for someone not to recognise Alexander in the sculpture (§840.8). Candace is especially pleased: 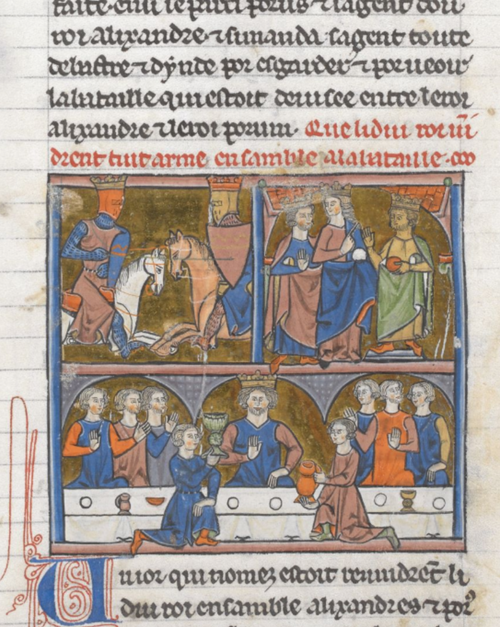 Queen Candace greatly treasured and venerated this statue because she very much loved the king in whose likeness it was made.

After Alexander, disguised as a knight in his retinue called Antigonus, rescues the abducted wife of Candace's son Candeolus (§841), he is summoned to meet the Ethiopian queen. Candace leads Alexander into her chambers where she presents him with the sculpture of himself. Her motivation, she says, for having the sculpture made was to have in her power – via the simulacrum – the man who had subjected the world to his rule (§842.2).

King Alexander beheld/considered the image/statue with great wonder, and was stunned by the great beauty of the queen, who humbled herself [before him] and [offered] all her power whenever the king wished to have it.

Manuscripts transmitting an illumination of this moment benefit from an obvious ­mise-en-abîme effect. Yet, more crucially, they ask questions of the medieval viewers who behold/consider the multiple images of Alexander in the manuscript. Do they, like Candace, treasure and venerate the king? Do they assert some form of power over him by having a representation of him in their presence? In short, is Alexander configured as a love-object to audiences both inside and outside the text?

Of course, the story is somewhat different for the second-redaction Histoire ancienne, produced in Naples in the 1330s, which omits the Alexander section (as well as the hefty opening Genesis section) and replaces the Troy section of the first redaction with a new prosification – number five – of Benoît de Sainte-Maure's Roman de Troie. Prose 5 – as it is known – also interpolates translations of Ovid's Heroïdes into the narrative (e.g. §161), which express the strong, intimate feelings of the characters. The two redactions take contrasting approaches to the place of love in the representation of the past.