Heidelberg, the beginning of June. Thunderstorms in Europe when we landed at Frankfurt. A quick and comfortable train trip to Heidelberg. One of the oldest and most famous universities in Europe. Contradictions. Host to an innumerable list of illustrious academics. Liberal under the Weimar republic but also quick to embrace the third Reich in the early thirties. The list of illustrious intellectuals that taught there is endless. Hegel, Max Weber, and, perhaps most significant for us as medievalists, Hans Robert Jauß (as a student) and Erich Köhler (as a professor).

Heidelberg is also the headquarters of the Dictionnaire Étymologique de l’Ancien Français (DEAF). We went there, Simon Gaunt and myself, to get scientific and technical advice and help with building an electronic glossary, but also in the hope we would get some ideas about how to make the most of the Histoire Ancienne jusqu’à César as an extraordinary mine of lexical and linguistic information: as a passport, as it were, to penetrate the unknown territories of the HA itself and to think some good thoughts about The Values of French Language and Literature.

The DEAF is heir to a great tradition of studies on language as an inherently historical phenomenon. The DEAF is about words, and their semantic and formal history. A few figures, easily derived from the website, will give you an idea of the scope of the enterprise: 1.5 million fiches, lexical entries, which rationalise over 12 million textual occurrences. Sheer numbers don’t entirely do justice to the importance of the DEAF. It’s the quality of the entries which tells us the full story: fruit of pietas and passion, I would say.

The words come from one of the most important slices of textual heritage in human history: the series of works, minor and major (some of them masterpieces), fictional and historical, philosophical, religious, political, and scientific, written in French in a time span ranging from 842, date of the Strasbourg Oaths, to the middle of the 14th century. Each entry, each word, is elucidated in the light of this textual patrimony, which is present here in its entirety (at least as far as published material is concerned). The DEAF has an extraordinary library in its office and our attempts to come up with an edition they couldn’t put their hands on in seconds met with abject failure: and not only do they have the books, they read each and every one of them. The dictionary mirrors the erudition and expertise of these dedicated and passionate readers.

The following picture indicates the extent of the entreprise, showing you about a fifth of the fichiers (containing tens of thousands of paper fiches now substituted by the electronic entries – totalling over 1.5 million). 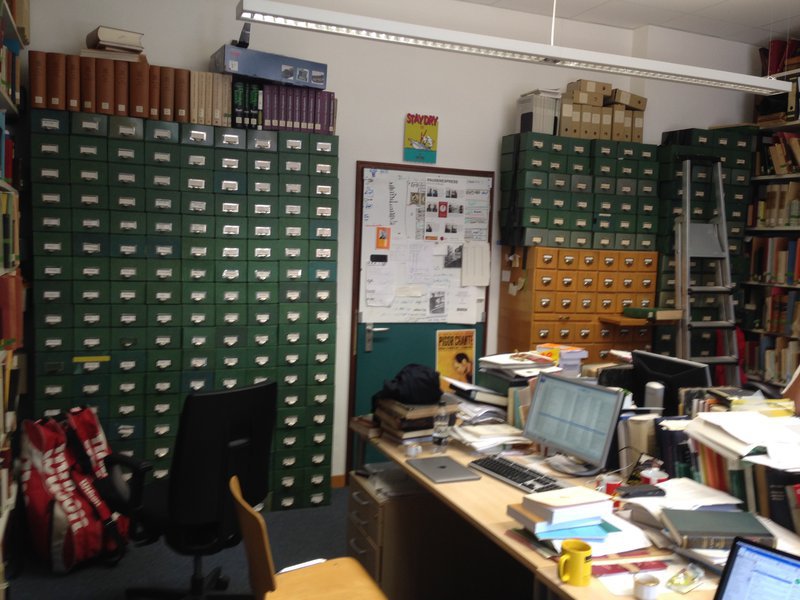 The paper fichier at the DEAF Heidelberg

It’s all about words. Let’s consider a word that is crucial for our project: fable. What can you learn from the entry fable in the DEAF?

Stephen Dörr and Simone Ventura at the DEAF, Heidelberg

In the first place, fable is a lemma. This means that under fable you will find a rigorously ordered apparatus of lexical, historical, cultural, and literary information related to fable as a noun and as a lexical matrix of a host of derivates and compounds.

The French noun fable, attested for the first time during the first quarter of the 12th century, is glossed ‘récit inventé plutôt que réel’. The word comes from Latin fabula which meant ‘conversation (en général)’ (the Latin noun being in turn related to the Latin lexical family of (fos), fatus, fari, meaning ‘to speak’). This historical semantics based on talking is revealing: to narrate is to socialise. In its historical meaning fable shows simultaneously the essential features of any narrative communication.  A story needs a choreography: a teller who narrates and a listener who pays attention. If the storyteller is good, then her audience won’t interrupt, and the story will be a success. If the storyteller is boring, well, that evening everybody will go home sooner than expected. Note that fable, being the noun designating the action of telling, implies that when it comes to storytelling, the accent is upon the telling and not upon the story: no matter what your story is about, you need to tell it right (and if you don’t believe me, maybe you should read or reread the novella of Madonna Oretta in the Decameron 6.1: you will immediately understand how unpleasant the consequences of being a bad storyteller can be).

Now, it goes without saying that the philologist and the lexicographer in you will be able to build up a rigorous scientific case around this word. That is to say: theDEAF will provide you with all that medievalists (or textual nerds – this is just another way of referring to the same beast) could wish or desire (even in their wildest dreams) for their research: dates, places, references, bibliographic updates, variants...

Yes, even variants. And even sometimes formal or graphic variants. Philologists maintain that there is a difference between form (mere ‘accident’) and substance (the true content). Sometimes (even if this is fortunately more nuanced today than it used to be) they subordinate the accident to the substance. Indeed this might even be our unconditioned reflex. Best case scenario – one may be inclined to think – these variants are just evidence for the (more presumed than real) anarchy of medieval scripts and scribes.

But if you take this stance, it’s your loss: you might miss one of the great pleasures that a dictionary like the DEAF quietly conceals. Let us make abstraction – just for a second – of the fact that some of these formal variants often carry important bits of information about the dialect, place and time in which they were used. Here, I would rather stress another thing: the fact that in my view there is an intrinsic formal beauty in the series of variants for fable. Try to read the series aloud: fauble,faule, fauvle, fole, flable, flabe, flave, flambe. The result is a soft, fricative, trochaic, alliterative whisper, a line that cannot be disliked by poets. Poets are lexicographers in nuce, are they not? And dictionaries like the DEAF are their poetics.

On a very final but important note, I should like to thank the heroes and specialists that make the existence of DEAF possible, particularly Thomas Städtler, Stephen Dörr and Marcus Husar, who so kindly, patiently, and generously hosted us in their holy of holies, and explained to us the value of a dictionary. 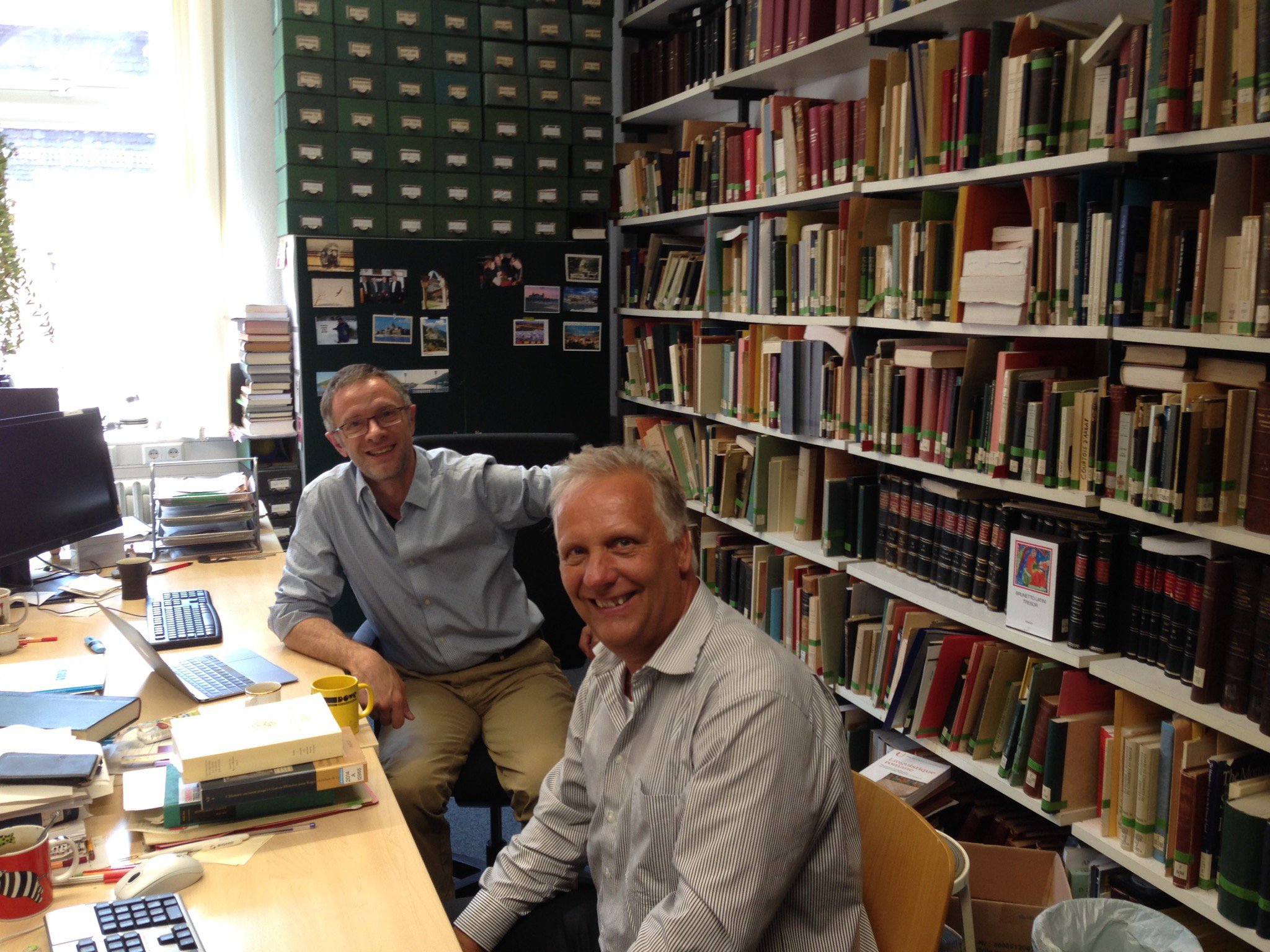 Stephen Dörr and Simone Ventura at the DEAF, Heidelberg